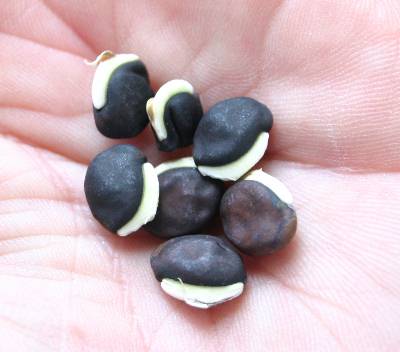 Q: I bought some black grape hyacinth seeds when I visited Monticello because I liked the color of the flowers. I planted them and now the plant has produced a large purple bean pod. Can I save the seed and plant them next year?

A: I’ll bet you misspoke yourself when you called them “grape hyacinth seeds”.

Monticello is famous for the arbors covered with hyacinth bean vines. The same plant is sometimes called “Thomas Jefferson bean”. The seeds are quite attractive: black with a white stripe along the top.

The vines bloom from July through October and produce bright purple bean pods containing three or four seeds. You can certainly save the seeds once the pods have turned brown after the first frost.

Keep them in a cool place until next May, then plant them where you can enjoy them once again outdoors.