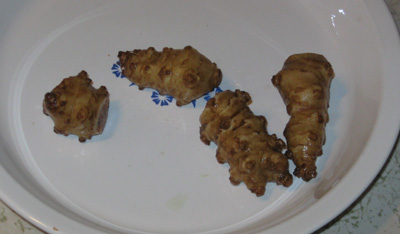 Q: My wife brought these roots from Russia and planted them in the yard last year.

We got almost a five-gallon bucketful when we harvested them. They are crunchy and tasty and she says they are good for you.

She calls them “ground pears”. Can you tell me what they are?

A: The plant is a Jerusalem artichoke, Helianthus tuberosus, a type of sunflower. Some people call it a “sunchoke”. It is native to the United States.

The bright yellow flowers, topping a tall mass of stems, are eye-catching in October. Its roots produce many fleshy tubers that look like small, knobby potatoes up to 3 or 4 inches long. Their high fructose/low starch content make them sought after by diabetic patients as a health food; however, this cannot be interpreted as a recommendation. They are peeled and eaten raw, boiled, or fried.

Plant tubers in the spring, 2 to 3 inches deep in well-drained soil in an area of the garden that is sunny and the plant will have plenty of room to spread, and where its height won’t create shade for other plants. The easiest source of tubers is to buy Jerusalem artichoke roots at the produce area of a large supermarket and simply plant those.

The plants are drought-tolerant, and require little fertilizer. Tubers can be harvested all winter and are best left in the ground until needed. Keep harvested tubers in a plastic bag in the refrigerator to prevent shrinkage.

Keep a close eye on the patch each year. Some gardeners have found the plant to be a bit invasive if given rich soil in which to spread.