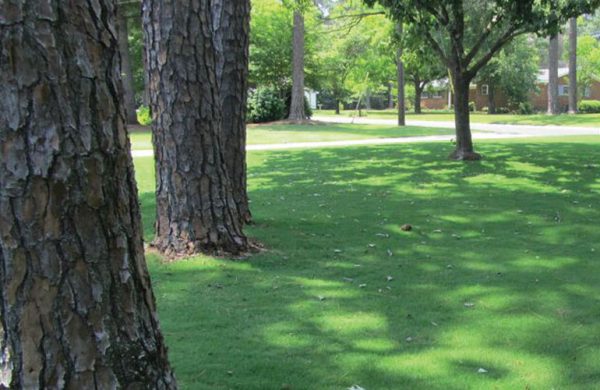 Centipede is a popular turfgrass selection for southernmost coastal plains and Florida because of some appealing features. It’s more shade-tolerant than bermuda. It’s also easy to maintain because it grows an even three to six inches without ragged seed heads; it can be mowed infrequently without scalping; it needs less lime and fertilizer—even prefers acid soil—and, perhaps most fascinating, it exhibits allelopathic characteristics. That means it acts as though it actually produces its own herbicide, choking out competing grasses and weeds. Add these characteristics to slow-growing but aggressive stolons (or runners), and it produces a dense, relatively weed-free, low-maintenance turf.

The negative side of common centipede is that it exhibits problems farther north—less cold tolerance and early fall brownout among them. It also has a shallow root structure that makes it relatively intolerant of drought conditions. These limitations have compromised the use of common centipede in North Carolina and other growing areas north of a line connecting Macon, Birmingham and Dallas.

TifBlair is a new variety of centipede – the first certified variety, in fact – designed to overcome many of those disadvantages. With a known pedigree, it gives reliable performance and consistency year after year. The North Carolina Department of Transportation is sufficiently convinced of its advantages that they are installing it along I-95 from Rocky Mount to the Virginia line to improve appearance and reduce mowing frequency. It produces more and longer stolons with more and taller leaves on those stolons, and is therefore thicker in a shorter growing time. It does not produce underground rhizomes like bermudagrass, which makes it easy to keep out of flowerbeds and paved areas. TifBlair seeds are larger than common centipede, making them more hardy and easier to handle. Its root system is also deeper and stronger, which gives it better drought and cold tolerance. TifBlair grows more rapidly, and was rated much better than common centipede in vigor and quality during controlled tests at Blairsville and Griffin, Georgia and Stillwater, Oklahoma during winters in which temperatures dipped to -10 degrees F. Increased cold tolerance in part accounts for the fact that it also keeps its green color later in the fall. Its growth range should extend well into USDA zone 7B and possibly approach the 7A zone, which would be well into Virginia.

Though first being released for public sale in 2001, the development of TifBlair began in January 1977 when Dr. Wayne Hanna of the USDA Coastal Plains Experiment Station in Tifton, Georgia irradiated seeds of common centipedegrass to cause mutations. He then planted those seeds, harvested seed from the resulting plants, and repeated the cycle of planting and seed harvest for several years. In May of 1980 he planted the seed in outdoor plots at Blairsville, Georgia. The next year the plot was mowed monthly, and the following winter only 30% of the plants survived. The surviving plants were the hardiest mutations, and he harvested their seeds.

Dr. Hanna then irradiated the seeds again, and in the spring transplanted seedings in the outdoor plot beside the surviving parent plants. The plot was again mowed monthly each year from May 1983 to September 1985; this time about 98% of the plants survived the 1983-84 winter, and none were lost in the 1984-85 winter. By this process of mutation and natural selection, Dr. Hanna had developed centipede that was cold-tolerant. Seed harvested from the surviving plants in 1985 became TifBlair.

During the following years from 1988 to 1993 TifBlair was extensively tested in Georgia, Alabama, and Oklahoma, being observed for six generations of reproduction. It proved to be stable and uniform. In 1992 Hanna established a larger breeder’s plot of TifBlair at Tifton, and in 1993 harvested enough seeds to provide to growers.

Seed and sod production have been exclusively licensed to a consortium, The Turfgrass Group, Inc. (TTG), which is now sublicensing sod production to qualified producers throughout TifBlair’s region of adaptation. TTG began commercial seed production in 1996, and they expanded seed and sod field production significantly in 1997. The first seed was available to sod producers in 1999. In 2004, Patten Seed Company became the exclusive producer of TifBlair certified centipede seed for wholesale and retail markets. The Turfgrass Group remains the exclusive producer and source of seed for sod production. TifBlair centipede sod is currently available from licensed producers in AL, FL, GA, MS, NC, SC, and TX and TifBlair seed is available from thousands of lawn and garden outlets across the country.