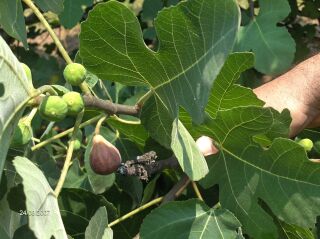 Several years ago I met fig expert Ray Givan and featured him on the “The Georgia Gardener” TV show. At that time he had a small website describing the figs he had grown. It was an invaluable resource to me. In the intervening years, Ray has gotten divorced and has moved around, leaving his website un-maintained. I found a copy of his site and have posted it below.

If you  know where Ray can be found, please tell him to contact me.

Note:  Most of these images were published in the September 1997 issue of Martha Stewart Living (a wonderful magazine for crafts and garden ideas) and are copyrighted by the publisher. Some of the identifications they use are erroneous, but I have left the magazine’s labels on the images wherever possible and merely added the correct name. Correct varietal names are in bold type.

A medium to large, purplish-black fig. Unusual for a dark fig since it has amber pulp. Brebas are pyriform with prominent neck; main crop figs are oblate to pyriform with a short, thick neck. Leaf: base cordate; 5 lobes; sinuses narrow; margins crenate. Very good flavor. Well-adapted in California. Apparently not hardy enough for the Eastern U.S. No synonyms.Black JackAn unidentified, large to very large fig with reddish-purple to black skin and strawberry pulp. Oblate, flattened at apex (eye end); ribs not elevated, but darker; shaded side of fruit is a lighter shade of purple; numerous white flecks. Leaf: base calcarate; 5 lobes, latate. Good flavor. Fairly hardy. Some say it is California Brown Turkey. I have not yet reached an opinion on this question. Synonym: Black Spanish(?). Small to medium, light-brown to violet fruit with strawberrypulp. Turbinate to oblique, mostly without neck. Small eye which has a reddish color from a very early stage (unlike Celeste). Leaf: typically small; base subcordate; 3 lobes; margins crenate. Cold hardy. It fruits on new growth if winter killed. Often bears two crops a year. Condit writes that it is very sweet, but not rich. My own experience is that is not as rich as Celeste, but is considerably better than passable. Good fresh or as preserves. Synonyms: Eastern Brown Turkey, English Brown Turkey, Everbearing, La Perpetuelle, Lee’s Perpetual, Texas Everbearing. Small to medium fig with light brown to violet skin and straw- berry pulp. Pyriform with tapering neck. Small, closed eye. The eye remains green until the fig is almost ripe which allows it to be easily distinguished from Brown Turkey the eye of which turns red quite early. Leaf: typically small; base subcordate; 3-5 lobes; margins crenate. Very cold hardy. [Condit and other experts write that Celeste will not bear on new wood in years in which it is frozen back. There are some strains, possibly the original, of which this is true, but J. Stewart Nagle has identified at least two strains which will bear on new wood. I also have one that bears on new wood after a freeze and is otherwise indistinguishable from the Celeste Condit describes.] Excellent fresh, dried or as preserves. Breaks up when stewed. Main crop only. Well-adapted in the Eastern United States, but usually unsatisfactory in California and the Southwest. Synonyms: Blue Celeste, Celestial, Conant, Honey Fig, Sugar Fig, Malta (after its supposed place of origin), and Tennessee Mountain Fig (which may be an even hardier bud sport).

Early Violet A small to very small, chocolate-brown fig with amber to pink pulp. Turbinate to oblate-spherical. Leaf: subcordate to truncate; 3 lobes; shallow sinuses; margins crenate. No brebas. Main crop is early. Fair to good. Once very popular in the South, but Celeste replaced it long ago. Susceptible to mosaic which dwarfs fruit and leaves. No synonyms. Fred Born acquired this variety from an Italian grower in Chicago a number of years ago and has shared it with other enthusiasts. It has also become a commercial variety for it is an excellent fig. (Note: Hardy Chicago does resemble Brown Turkey, but the leaves and fruit are distinguishable. It is very hardy. The fruit is small to medium with blackish=purple skin and strawberry pulp. Small eye. Pyriform with long slender neck. Leaf: base calcarate; 5 lobes, lyrate. Very good fresh, dried or in preserves. Responds well to oiling (a method of inducing ripening of immature fruit in late Fall). Well-adapted in the Eastern U.S. and deserves trials in the Northwest. Last summer I confirmed to my own satisfaction that the commercial variety offered by Edible Landscaping is identical with Fred’s variety. Synonym: Chicago Hardy. A small, oblique-spherical violet fig with strawberry pulp. Good quality and dries readily. Condit has only a meagre description of this variety and I just acquired a plant likely to be this variety in Nov 1998. I expect to trial this variety with northern growers since it should be very suitable for areas with cool summers. It is/was grown in Argenteuil, a Parisian suburb, for market. Northern France is not noted for having warm summers. No synonyms. A small brown fig with amber pulp tinged with strawberry, bred by E. W. Hunt of Eatonton, Georgia in the 1920s. Pyriform with a short distinct neck. Slender, variable stems to 1 3/4″ long stems help it shed rain. Leaf: base subcordate; 3-5 lobes. Very good flavor. Sweet and rich. Not a heavy bearer, but well-adapted in the rainy areas of the South. Deserves trials in the Northwest. Seems fairly hardy. Probably not popular because it is hard to propagate. No synonyms.

A small purplish-black fig with strawberry pulp. Oblique-pyriform to turbinate. Leaf: subcordate to truncate; unlobed to 3 lobes; sinuses shallow. Fairly sweet and rich flavor. Well-adapted in coastal California, but not very productive in the South. Not particularly hardy. Has been replaced by Celeste. Synonyms: Blue Ischia, Nero
.
LSU Purple

A small to medium purple fig with variable shape and flavor introduced by E. N. O’Rourke of Louisiana State University in 1991. Leaf: base calcarate; 5 lobes, central lobe spatulate, side lobes latate. Said to be nematode resistant. It may offer good rootstock for grafting (if the grower doesn’t like the fruit). Well adapted to the Deep South. Fairly tender for me, but Mike McConkey says it is hardy in Virginia. Does rebound well from winter freezing and killback. No synonyms.

A large black fig with light strawberry pulp. Heavy crop of brebas: pyriform with a prominent thick neck; main crop figs are smaller and more variable, Leaf: base calcarate; 5 lobes; latate. Distinctive, rich flavor. Well-adapted in California. Very vigorous, but not hardy. Often infected by mosaic which mottles the leaves, but does not seem to effect the crop. One of the best where adapted. Good fresh and dried. Synonyms: Franciscana, Black Mission. A very large fig. Purplish-black, lighter or even green towards the stalk. Numerous white flecks. Pulp is light strawberry. Turbinate-pyriform, sometimes oblique with a broad apex. Eye medium, open. Roll your mouse over the image on the right to see a close-up of a Nero fruit. Leaf: base cordate; 5 lobes, middle lobe spatulate, side lobes latate. Flavor is sweet and rich. Needs heat to develop good flavor and adequate sugar. Very good to excellent fresh; poor when stewed as it breaks up. Well-adapted in the Southwest and South. Synonyms: Barnisotte, Brogiotto Nero Petite Negri
Identical with Negronne. Introduced under trade name of Petite Negri by Mike McConkey of Edible Landscaping. This fig is Negronne: The name Petite Negri was given Ischia Black by a Frenchman in the late 19th century. It was eventually imported into the U.S. and became confused with Negronne in a commercial nursery. (An understandable error since the very young, reddish-brown fruit is easily confused with that of Negronne.)
Royal Vineyard A medium bronze to brown fig with light strawberry pulp. Brebas are pyriform with a prominent thick and curving neck. Leaf: truncate to subcordate; 3-5 lobes; upper sinuses shallow and narrow; margins serrate. A San Pedro type. Brebas only! Condit says the breba crop is typically small. Not worth growing in parts of the South with late frosts which destroy the fruit in most years. I discarded my own Royal Vineyard in 1995 since it had only produced two fruits in ten years. The plant is vigorous and might deserve trialing in the North and West. Synonym: Drap d’Or

A small to medium fig giving two crops. Leaf: deeply subcordate, 3 to 5-lobed with shallow sinuses, light green. Brebas: medium, grayish-bronze with light pink pulp, oblique-turbinate to pyriform, large and open eye. Rich and sweet. Main crop: delicate violet-gray with strawberry pulp. Other characters, including flavor, are much the same as in the brebas except for one distinctive feature: there is a heavy bloom on the body with a very sharp demarcation line with the apex which is devoid of bloom. Note: I do not have this variety and would very much like to acquire it. Synonyms: Grisé Savantine Bifère, Grisé de Saint Jean, Grisé Madeleine, Grosse Grisé Bifère.

A small to medium, unidentified, black fig with good flavor. Well-adapted in the Northeast. The Belleclare Nursery (no mail orders) in Bellevue, Long Island introduced it years ago. You can find a listing of local varieties, not described in the literature, but possibly very worthy of growing on the U.S. Varieties Page.
Tennessee Mountain Fig
See Celeste
Texas Everbearing Also, see Brown Turkey. The literature, that is Condit, says that the Texas Everbearing and Brown Turkey figs are very similiar if not identical. Generally speaking, I rank myself with the “lumpers” and not the “splitters,” but the fruit and leaves just don’t look the same to me. The Texas Everbearing in my collection, pictured on the right, does not closely resemble my Brown Turkeys.

© Copyright, Ray Givan, 1997, 1999. Permission to download and print for personal use is granted to viewer. All other rights are reserved.