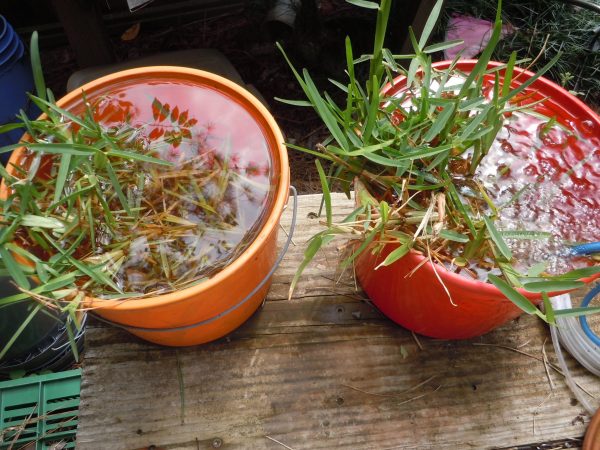 My friend Kim C. remarked to me that the coleus stalks he’d absentmindedly stuck in an ornamental fountain had rooted much quicker than similar cuttings he’d put in a bucket of water.

Eager to test his observation, I clipped 30 St. Augustinegrass runners and divided them equally between two buckets.

In one bucket I put an air stone normally used in an aquarium. The other got nothing and both were filled with tap water.

Three weeks late I removed the runners to check on the roots. I’ll let you judge for yourself how well the aerated water accelerated the rooting process.

Matt C. adds:  “I use an ultrasonic fogger to root my cuttings. (get it on EBay for cheap). I have use a bucket just like yours or a larger Tupperware/storage type container. I then bundle/tie together the cuttings so they can be slightly suspended from the bottom of the container. Drop in the fogger and let it rip. During the growing season, I’ve achieved the same results as your aerated example in 1-1.5 weeks. Adding a tiny bit of nutrient to the water supply accelerates the process. That being said, I prefer the storage container, because it has a lid. On my lid, I cut out several holes – for a place to hold my cuttings-, that way I can have several bundles of grass rooting at the same time. This also works great for rooting other things…such as when I’m done with my romaine lettuce hearts (or celery, kale, etc) I stick the base in one of the holes, and voila! The lettuce and kale base will root in about a week, celery in about 1.5 weeks…and for tomato cuttings it’s almost instant (though I can’t grow tomatoes here, too many leaf miners…but that’s a different story). Also just tried this with some old broccoli I had in the fridge….I cut off individual florets, stuck them in the holes. It’s been about a week and a half, and I just noticed our first roots. Looks like we’ll be swimming in broccoli this winter/spring!” side by side buckets cuttings from water NOT aerated cuttings from water that WAS aerated