Anole (Lizard) – In the House 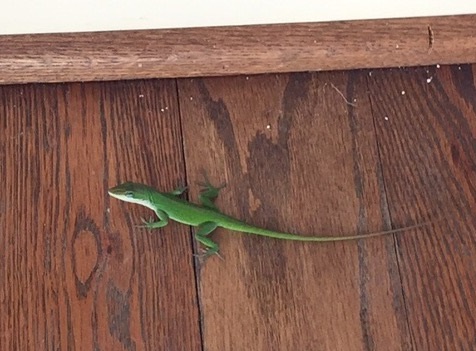 Q: I recently moved back here from Tampa. There, small lizards are found everywhere – they’re as common as squirrels and mosquitos.

Here in Atlanta, in all of my life, I have never once seen a lizard inside or outside any house. I have been here for two months and have seen several at my new house in DeKalb Co. There are brown anoles outside and brown/ bright green anoles inside. I have captured & released three in the past week.

A: Yes – you have a cute little green anole.

Reptiles, with their primitive brains, are attracted to an area mostly by the presence of food (insects, earthworms, etc) or shelter (shrubs, sunny tree limbs, etc). It’s likely that your creatures are simply lost: there is no reason for them to be inside your house. There may be shrubbery, where they shelter, near a door that is frequently opened. If an anole is sunning, unnoticed, on the door jamb it might scurry indoors before you notice it doing so. Since they are harmless to humans or pets, simply usher them back out doors gently with a broom.