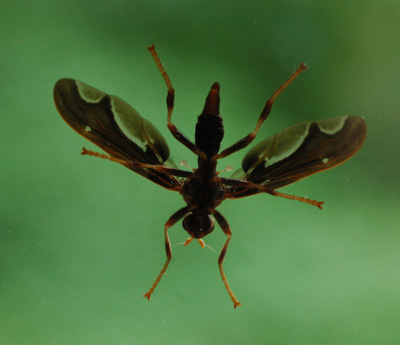 Q: What is this insect? It is on the outside of my window. It looks as if it may have a stinger but I have never seen anything like it.

“Well, no chance of getting this one mixed up with anything else. It’s actually a fly, but fairly large, with a wingspan of about an inch or so.

“It’s a member of the family Pyrgotidae (no common name). This particular species is Pyrgota undata. I have heard of them referred to as “Light Flies.” No idea why, other than the fact that they do commonly come to light at night (which is not particularly common in flies).

“Their larvae are parasitic on brown June beetles (Phyllophaga spp.), eventually killing the larva. Supposedly they can actually put a dent in the population of the beetles, which seems a little hard to believe!

“An interesting aspect of their biology – adult females actually catch the female June beetles in flight, wrestle with them a bit and eventually end up depositing an egg in the beetle’s butt! The beetle lays her eggs and at the same time lays the fly egg(s) which, when hatched, attaches to the newly hatched beetle larva and continues to feed on the growing larva until eventually killing it. Pretty weird!