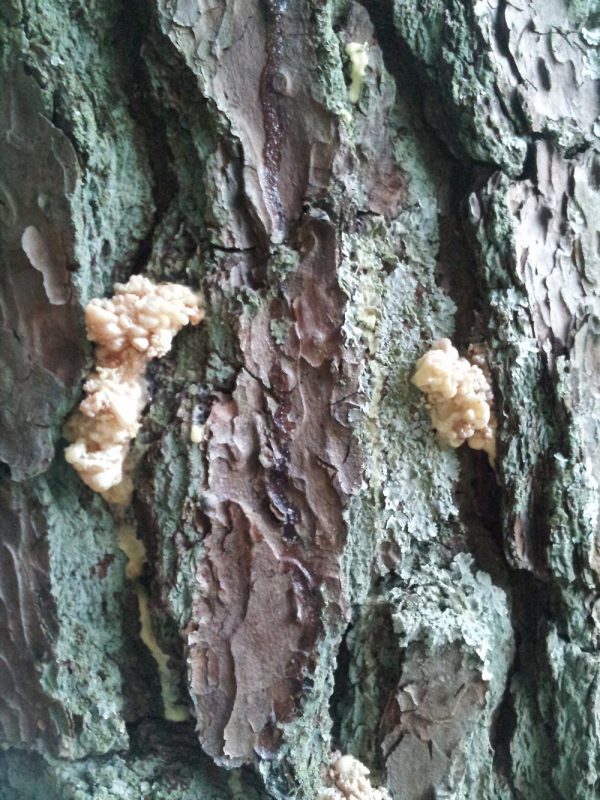 Q: Can you identify what the goo is oozing from the trunk of a pine tree in my backyard? I would hate to have to remove the tree.

A: The “goo” is hardened resin from the tree. It came out of the tree due to the inroads of one of the three common pine boring beetles: ips beetle, turpentine beetle or Southern pine beetle.

Black turpentine beetles commonly attack just the lower trunk of a tree. Ips beetle attacks the whole tree. Southern pine beetle will bore into any limb 3″ in diameter or larger. This means you could have a Southern pine beetle infestation much higher in the tree than you can easily observe.

If the needles in your tree are green, not yellow, red or brown, it’s a sign that the tree is successfully fighting the damage done by the borers.

There is no insecticide that will control them. The best thing you can do is water the trees during drought so there is enough sap to drown the beetles when they first dig through the bark.

Pruning of live pine branches should be done between November and February to prevent the sap from attracting beetles. Trees should not be climbed using tree spikes. Spike wounds will attract beetles. Green pines cut for fire wood should not be stacked near healthy pine trees. This may attract bark beetles to the yard trees.