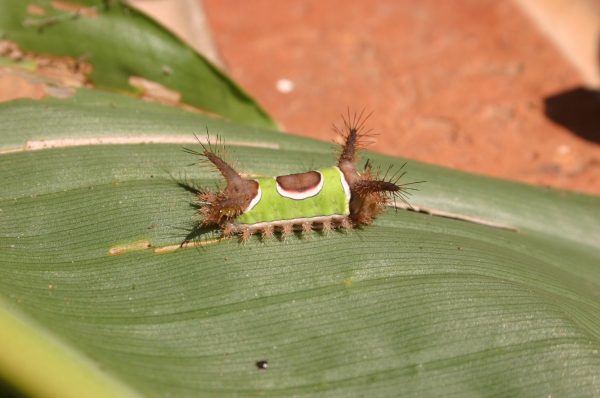 Saddleback caterpillars are one to one and a half inches long. They are distinguished by the large brown spot or “saddle” in the center of their back. Stiff, white hairs cover the sides and both ends of their body.

Saddlebacks are capable of launching a two-pronged defense response.  All of its stout urticating bristles may break-off to remain embedded in their assailant.  Some are envenomating bristles and they contain two types of venoms:  vesicating (blistering) and hemolytic which breaks down red blood cells.  Stings from these hairs are intensely painful and are described by hapless victims as sharp and burning.  The pain may last for a long time and often spreads over a large area.  Although saddleback stings are not generally life-threatening, it is best to seek medical attention.  As with bee and wasp stings, some people are particularly sensitive to the saddleback venom.

The caterpillar feeds on leaves in late summer. It will soon pupate and overwinter on a dry twig. You can’t really do anything to get rid of them on a wide scale – insecticides would just kill lots of other bugs without appreciably lowering the number of saddlebacks.

The best defense is simply a pair of sharp eyes. Look before you plunge into your shrubbery to prune or to retrieve a garden hose. Watch out when you weed your flowers. Next spring, a brown moth with black streaks on her wings will hatch and begin the process again.