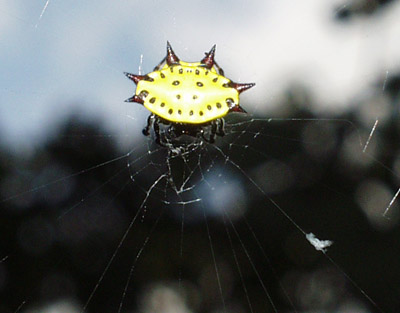 Q: I almost bumped into this little beast this morning. He is about 3/4-inch across and was in the middle of a large web about 6-feet off the ground in a shady area. He looks like he forgot to take of his Halloween costume!

A: It’s a spiny orbweaver spider, Gasteracantha cancriformis. Some folks call it a crab spider.

Like most spiders, it is interesting but not poisonous.

(Actually, spider expert Jason R. points out that “…there is no such thing as a “poisonous” spider. Spiders are venomous rather than poisonous, due to the delivery of their toxin. However, all spiders are venomous. There is no such thing as a non-venomous spider. All spiders have venom, but most of them either cause no reaction in human bites, or have fangs too small to bite humans effectively.”

Keep your eyes peeled later this summer for the big yellow and black garden spider known as the writing spider or argiope.