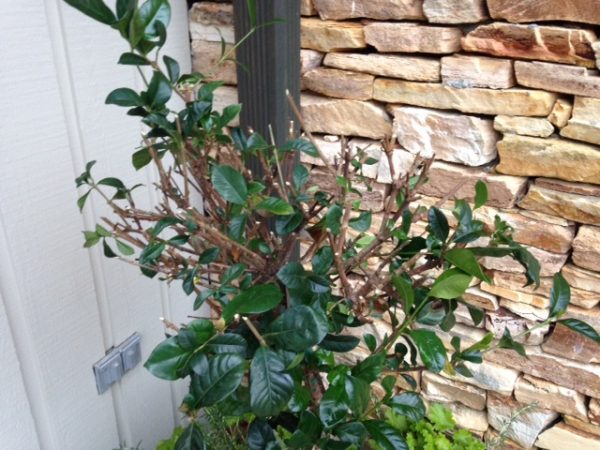 Q: Something has used my gardenia for nesting material (which ended up under the hood of my car). What do you think?

A: My original answer was:

“It’s gotta be a squirrel! They like twig nests….but I’ve never heard of one nesting in a car engine compartment.”

Mary T. has a better explanation:

I saw the recent question about a nest built of vegetation under a car hood. We had a similar thing happen in our grill several years ago, though it happened to be in late August.

We have a screen porch with a ledge that runs around the interior. One Tuesday morning I noticed a small puddle of water on the ledge, and we’d had no rain that could have blown in. As I looked more closely, I saw tiny rodent footprints leading away from the water. Very surprising given that this was inside the screen porch! I then realized that some small creature could have gotten onto the porch through the ½-inch gap under either of the doors. My first thought was a chipmunk, since we are often inundated with them in our yard. I researched chipmunk prints and determined that identification was wrong.

I also looked around the porch for other signs of the creature. I saw nothing obvious at first. There were no signs of mouse or rat droppings anywhere, and I know from past experience that they usually leave evident droppings. None of the furniture cushions had been chewed. Nothing seemed disturbed in any way. But then I noticed that some of my houseplants were gone! In summer I keep houseplants on the screen porch, and I always watered them on Monday. As I surveyed the porch, I noticed that my wandering Jew and vining philodendron were gone! The pots and soil were there and perfectly in place, but all of the foliage was gone, and there was no sign of even a scrap of it on the floor. I knew the plants must have been there the day before when I watered (though it briefly occurred to me that I might be losing my mind and/or memory!).

I then remembered that a mouse had once built a small nest under the hood of the car that we keep in the driveway, but she had used dried leaves, not fresh foliage. (There was also evident mouse poop under the car hood.) Anyway, that prompted me to look under the hood of the car, but there was nothing there. At that point, I tried to think of other protected places a rodent might like to use for a nest. The gas grill! We kept it stored on the screen porch. I lifted the grill cover, and there were my plants, arranged on top of the grill rack, along with parts of a Christmas cactus and fern. (At this point I took the picture, which I sent you earlier.) Whatever this was could have easily entered the grill through an opening in the back that is about 1 inch tall.

Out of curiosity, I left the nest in the grill that day, but I checked it again the following morning. The grill was crammed completely full of all sorts of material (wish I had gotten another picture). The critter had very neatly brought in scraps of weedblock from the yard along with other fresh vegetation. She had also cut strips from a bale of twine we had on the porch for tying up yard waste. She had even used some Q-tips that were on the porch from a varnishing project my husband had recently been working on.

At this point I figured my best chance was to continue to try to identify the rodent tracks that I’d seen (which I had sketched for reference). Luckily I found a book on animal tracks at my local library. The closest track I found was from the Florida Woodrat (also called Eastern Woodrat) or Neotoma floridana, which was also described in my National Audubon Society field guide to mammals.

In my research from the books and some online sources, I found that this is a native packrat – and she certainly lived up to her name given the assortment of material that she used. I also learned that this creature uses “latrines,” so the little puddle of “water” I saw was actually her urine. She was surprisingly neat for a rat, with no sign of poop anywhere (either in the grill or on the porch), and she never dropped a bit of nesting material anywhere on the floor. I went ahead and removed her nest (though I felt a bit guilty) and left the grill top open, and she never tried building there again.

Later in the fall, I was taking the furniture cushions in for the season, and I found her poop latrine behind one of them – again very neat, and only in that one spot.

Here is some more information I gleaned from my sources: breeds year-round; large nests of sticks, leaves, or rubbish; may nest in or under rock outcroppings or ledges; feeds on fresh vegetation and berries, etc; may forage in crowns of trees and shrubs; mainly nocturnal.

Of course, I can’t be sure that my identification was correct, but this is my best guess – plus it makes a pretty good story, whatever the critter was!