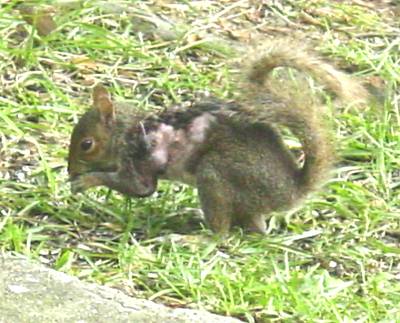 Q: I have noticed several squirrels with bleeding lumps on their skin. Do you know what disease this is?

A: For some gardeners, a few less squirrels in the world would be a godsend. Others, though, enjoy watching the antics of these furry acrobats as they careen through the trees. Sometimes in the fall, squirrel watchers note that some of the animals have bare patches of skin. On closer examination, bloody ulcers and lumps can be seen there. Chipmunks may also exhibit these symptoms.

The problem is caused by a parasitic fly (bot fly) which lays her eggs in the soil where these animals live. The larvae emerge and attach to the animal’s skin, eventually burrowing beneath it. As the larvae grow, the irritation causes the rodent to scratch the hair from the area. Old-timers called the larvae “wolves” or “warbles”.

In October, the larvae emerge from the skin and go back to the ground to pupate. Though it is distressing to the animals and to the nature lover, there is nothing that can be done about the problem. Weakened animals may die but most will be able to recover from an attack of these parasites.

Bot flies are well described on the following link.

WARNING: Do not look at the pictures if you are about to go to lunch – particularly if barbeque is your intended repast!

I would warble at a very high pitch if I found warbles under my skin!