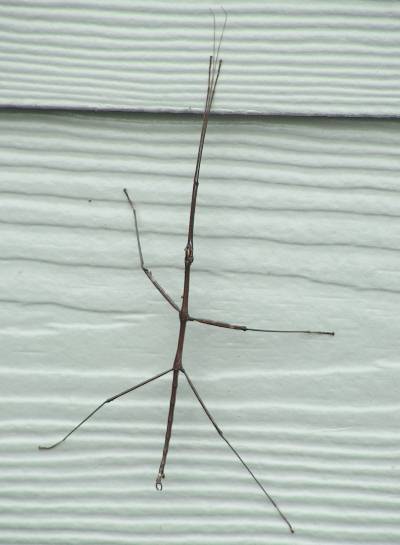 Q: I assume this is an insect. It’s approximately 6″ top to bottom, with “feelers” taking half of total length. Is that pincher at the bottom used to protect itself?

A: Your critter is a walkingstick insect. In fact, you can determine that it is a male due to the pinchers on the end. The male uses these to clasp a much larger female when they breed.

So, if it’s an insect, it must have six legs, right? But your photo shows only four legs on the walkingstick.

Look closely at the “head” end and see that the bug has extended its two front legs out parallel to its antennae. This move makes it look even more like a twig, thus avoiding birds and other predators.

Interestingly, walkingsticks are herbivores. They feed on plant leaves at night, remaining motionless during the day.

They are not considered pests….just interesting fellow inhabitants of the natural world.

You can read more here.