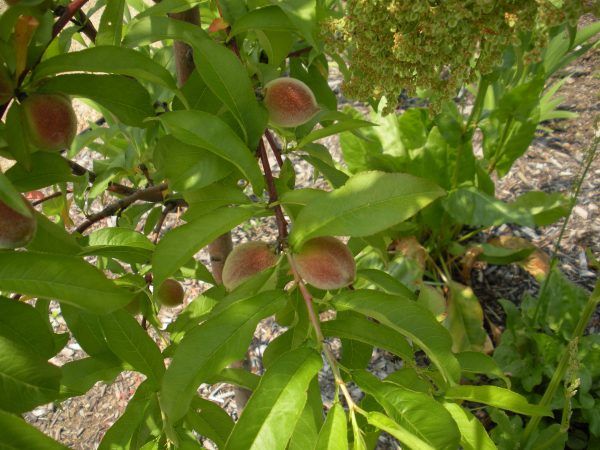 Rick Hindman recently sent me an e-mail requesting information on attracting wildlife. It gave me a great opportunity to brush up on the food needs of wild animals.

In Rick’s words, “I live in Carroll county, and I want to create some wildlife habitat on a small farm. I would like to plant persimmon and apple trees as soon as possible. I need suggestions on what else to plant, where to buy, etc.”

I shared the note with Theresa Schrum, newly elected vice-president of the Georgia Native Plant Society. She began right off the bat by stating that she’s a strong believer that providing native food sources for native wildlife is the best way to go. It simply makes more sense to Theresa in terms of our ecology. Between the two of us we came up with a nice list of wildlife-attracting plants for Rick and for other who want to follow his lead.

PERSIMMON Wild persimmon, Diospyros virginiana, is native to Georgia. It is found growing uncultivated in many areas. A medium to large tree, it is dioecious, meaning that there are separate male and female trees. Female trees produce edible fruit only when in close proximity to male trees. Most animals don’t seem bothered by the astringent aftertaste of the fruit. It is definitely a possum magnet!

Japanese persimmon, Diospyros kaki also grows well in Georgia and has fruit desirable for human and animal consumption. My friend Daemon Baizan has a Japanese persimmon in his front yard that causes passing drivers to literally screech to a halt in the street to see what they mistakenly think is a Florida orange tree loaded with fruit in winter.

APPLE Theresa notes that apples are not native to Georgia and that one must carefully select cultivars to make sure that the trees will produce apples in the chosen location. My feeling is that ‘Callaway’ and ‘Zumi’ crabapple plus heirloom apples are good choices even though they may only last fifteen years if untended.

PLUM Prunus americana is our native plum but Chickasaw plum, Prunus angustifolia is an alternative. Both have showy white flowers in spring and the fruits are widely used by wildlife.

BLUEBERRIES I know for a fact that blueberries attract wildlife because I split my crop each year with the blue jays, mockingbirds and brown thrashers that inhabit my yard. Any edible blueberry will do: ‘Climax’, ‘Triumph’ and ‘Tifblue’ are readily available. Sparkleberry, Vaccinium arboreum is in the blueberry family but the fruit is very bitter. Nonetheless, a wide variety of birds enjoy its fruit.

HOLLY Wildlife and hollies have a co-dependent relationship. Neither would be nearly as numerous without the other. Winterberry, Ilex verticillata , has very persistent red fruit which is enjoyed by animals and which is also widely used in holiday decorations. Only the female winterberry bears fruit, so a male ‘Jim Dandy’ or ‘Apollo’ should be planted nearby. Possumhaw holly, Ilex decidua, has orange-red fruit. Gallberry, Ilex glabra has black fruit in late fall. Yaupon holly, which has the unappetising Latin name Ilex vomitoria, has red fruit and grows vigorously in wet or dry sites.

Other trees and shrubs that attract wildlife include oak, dogwood, serviceberry, beautyberry, cherry laurel, red buckeye, mulberry and sumac. Honey locust bears bean-like pods which exude a sweet, gooey paste when ripe. Animals love them, for obvious reasons, but a radio listener recently told me that impecunious University of Georgia students made locust beer from the pods in the late 1940’s!

SOURCES Local nurseries stock many of the plants mentioned above. Lawson Nursery (770- 893-2141) in Ball Ground and Johnson Nursery (706-276-3187) in Ellijay specialize in heirloom fruits. Perimeter College Native Plant Botanical Garden (404-244-5001) has several plant sales and talks throughout the year. The Georgia Native Plant Society lists many other sources for native plants.