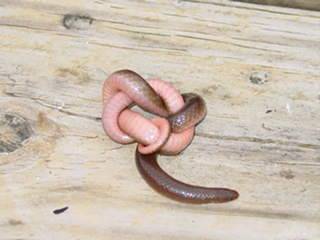 Q: This morning, while out topping off the bird feeders, this thing fell out of the sky and bounced off the roof of the house, landing near my feet.

My guess is he wiggled away from whatever bird had planned to have him as a breakfast guest. Do you have an ID on him?

A: It’s a worm snake, Carphophis amoenus. While they’re not exactly uncommon, they are seen much less often than “regular” snakes, like rat snakes and garter snakes and DeKay’s snakes. These creatures are noted for their hard, conical head and pink underbelly. They live in thick leaf litter under trees, feeding on earthworms and soft-bodied insects.

I think your theory on where the worm snake came from is right on the money. A bird didn’t have quite as good a hold on it as the bird originally thought.

Though it’s late in the year, worm snake habitat under leaves would still be reasonably warm.