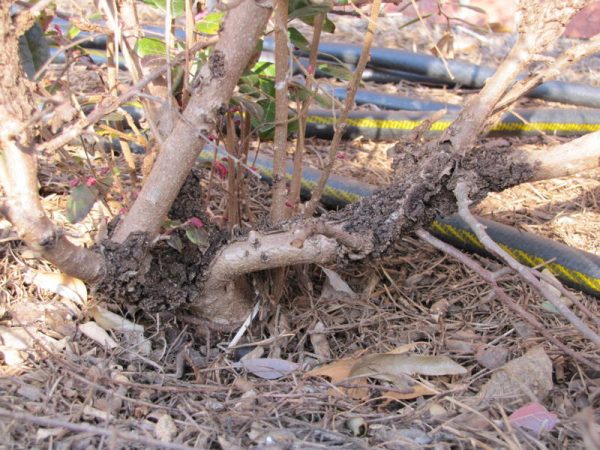 Q: My loropetalum has several dying limbs. I had assumed that it had simply been stung by cold weather. However it appears I have some type of critter munching on its bark. Is there treatment or should I just start all over again? What did this?

A: At first I was certain that this was crown gall, Agribacterium tumiefacens, a bacterial disease that affects oaks trees and several other plants.

But Jim Jacobi, Extension Plant Pathology Specialist at Auburn University says:
The pictures look similar to what I and a few other pathologists have seen in the last few years.  We have tentatively identified the bacteria Pseudomonas savastanoi, as the cause of the problem.  This bacteria causes galls and knots on oleander, olive and other plants.

For treatment, the link below says “On diseased plants, removal of galled lateral branches may help slow disease
spread. Cuts should be made several inches below the gall or canker. Pruning tools should be sterilized before each cut in dilute isopropyl alcohol or similar disinfect to avoid accidentally introducing the causal bacterium into the wound. Best time to prune out galled shoots would be during extended periods of dry weather in the spring or fall. Making several protective
copper fungicide/bactericide applications after pruning may further slow disease spread.”