Pine – Damaged by Termites and Rodents 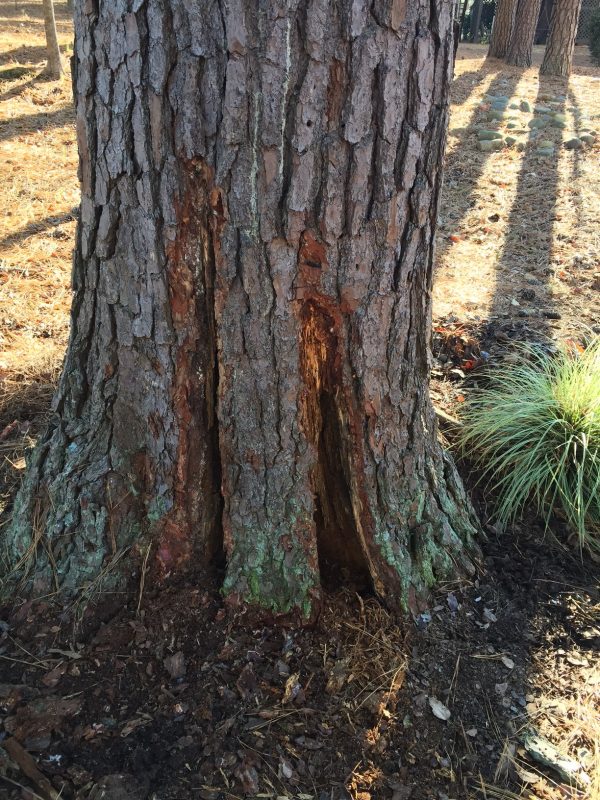 Q: This tall pine has termite damage at the base that we just discovered last week. I’m worried that the tree could become weak and fall down and hit our house.

A: Tree health specialist Chris Hastings www.arbormedics.com says that once a tree is damaged all sorts of insect, fungi, and other critters take up residence in the decaying cavity. In terms of tree diagnosis, there is much more information to be gained from studying the healthy tissue along the edges of the wound rather than the rotting wound itself. If I had to guess from the limited photos, I would say that your pine might have cracked during a storm or was struck by lightning years ago. The dead tissue was subsequently invaded by fungi/insects/critters and termites. In our area of the country, termites invade dead sections of trees but cause no primary harm to living parts of the tree.

I use the word “critters” because on several occasions I have discovered rodents living in tree cavities (mice, rats, chipmunks). I knew they were there due to the rodent poop accumulating at the bottom of the cavity as it dropped down from above. It’s hard to tell from the picture—could the black pellets be rodent poop? Even if that is not the case, I would not worry about it since it appears to be confined to the dead areas of the wound. Otherwise, you would see a different texture of wood that was likely engaged with some degree of sap flow.

Regardless, I think it is a good idea to remove the tree.

The termite damage is real and probably caused after an animal incursion — the black pellets could have been a field mouse, chipmunk, etc. Or the fungus and termites softened the tree enough that a rodent had its way at getting in.

The termites may have died out since they won’t attack live wood and probably due to some lack of moisture in the central core of the tree (which is dead wood).

Often old pines will have significant heart rot, and be partly to completely hollow due to animal incursion, termite wear-n-tear, or fungus munching.

I suspect rodentia for the pellets and lack of real food for the die out of the termites.