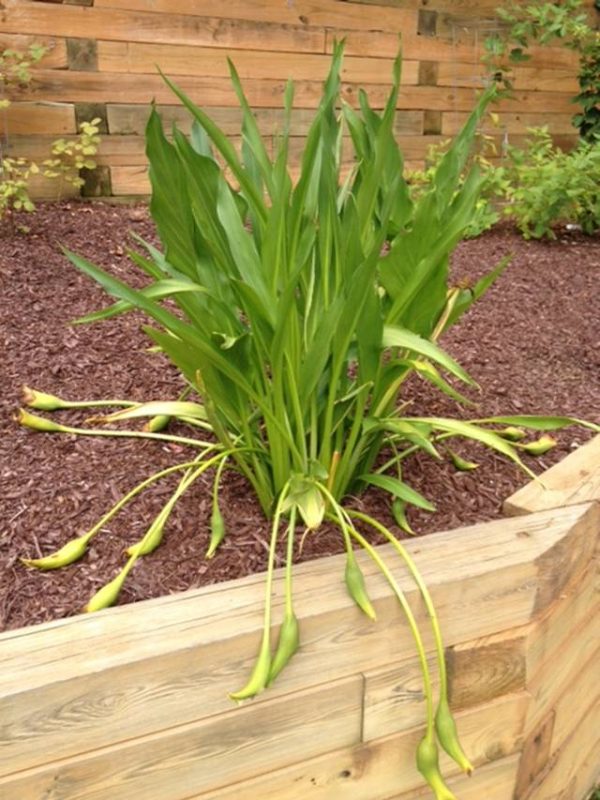 Q: This lily has white and purplish flowers in the spring and is quite attractive. I would like to know if these are seed pods. If so, how I would go about planting them so I could have more plants next spring?

A: You’re seeing the seed pods of calla lily. It’s a member of the aroid family and so makes seed inside a spathe (the pretty bloom you enjoyed in spring).

Here is some info I found:
What to do with Calla Lily seeds?

“Callas can indeed be grown from seed, and if you’re not careful, you could end up with hundreds of these little darlings.

“First, just keep an eye on the flowers. If your calla is happy, then in my experience about half the flowers will self-pollinate and begin to develop. Cross pollination is I’m sure possible, but I don’t know the natural vector for that. Look down into the flower, and you’ll see little kernels forming along the stamen. Wait a couple weeks, and if the flower seems to be fading, and these little kernels have failed to further develop, go ahead and cut off the flower.

“If they are developing, and you’ll be able to tell, as they grow larger and plumper, and the whole stamen will begin to resemble a small cone, or pineapple shape. Just be patient, it can take up to several months for the cone to mature. Eventually, the cone can get as long two to five inches, and as thick around as an ear of corn. You’ll notice as the cone matures, it’s increasing weight will naturally bend the stem until the cone is resting on the ground. Keep an eye on it, and you’ll see the kernels begin to turn yellow and become mushy to the touch. It appears it’s beginning to “rot” but this is all part of the natural process.

“At this point, the cone is mature, and each one of those “kernels” contains at least one or two seeds, and up to four or five seeds, each resembling a miniature tuber, about 2 mm in size. Harvesting the seeds is a bit messy, but take the cone, place it on a plate, and gently squish out the individual seeds. The whole cone can easily net you 50 seeds or more. If you want to post-pone seed harvesting, just place the cone someplace warm & dry, and eventually you’ll have an ugly, desiccated dark brown cone with roughly the firmness of a dried piece of apricot. The seeds never really dry out completely, they’re protected within the flesh of each kernel.

“When you’re ready, plant the seeds no more than say, 1/4″, or 1 cm deep, and if you can, space them about 1/2” apart. Don’t worry if can’t separate all these sticky seeds. Just spread a bunch of them in the pot, cover with dirt, and keep them warm, sunny & moist. The resultant seedlings are pretty tough, and can be separated later after they’ve grown two or three leaves.

“Germination time can vary quite a bit. I’ve had some pots of seeds come up within four or five days, and other pots seemed to take a month or more. But these seeds are quite viable, and they will come up eventually. Treat the seedlings mostly the way you would adults. Just keep the warm, moist, not soggy, and lots of sun, avoiding the hottest midday sun if possible. Repot as needed for size & space.

“If you’re growing the colorful cultivated types of callas, they shouldn’t need a dormancy period their first year, or until the tubers have grown to about 1 to 1 & 1/2 cms in size, at which point you can treat them as adults.

“Under optimum growing conditions, you might get a bloom in their second year, otherwise, expect something in their third year.