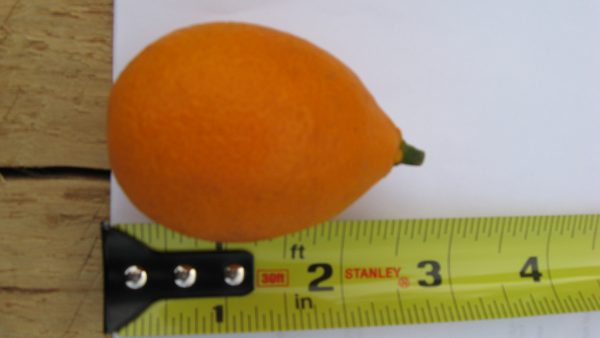 Q: I have four orange trees in McDonough. The three trees by the driveway are about 18′. I have pruned the other one to about 12′.

Due to the egg-shape of the fruit and the plants’ cold-hardiness, I think you have a ‘Thomasville’ citrangequat.

Citrangequats are trigeneric hybrids involving kumquat and citrange, the latter of which is a hybrid of trifoliate orange and sweet orange. One objective of the breeding program of U.S.D.A. in the early twentieth century was to combine the cold hardiness of kumquat and trifoliate orange with the quality of sweet orange. Only three citrangequats were ever named; they do have good cold hardiness, though eating quality is very poor to nonexistent.

‘Sinton’ is the result of a ‘Nagami’ kumquat X ‘Rusk’ citrange cross that has small, obovate fruit of good reddish color, acid flavor and few seeds. The tree is upright, nearly thornless, with mainly unifoliolate leaves. It was named in 1923 for Sinton, TX, where it first fruited. As an ornamental, it is hardy and attractive.

‘Telfair’ resulted from a cross between ‘Nagami’ kumquat and ‘Willits’ citrange and was named for Telfair County, GA. Its fruit and tree are similar to ‘Sinton’ except that it is thorny and has mainly trifoliolate leaves.

‘Thomasville’ is a sibling of ‘Telfair’ that first fruited in Thomasville, GA. Its fruit are a little larger than the other two citrangequats; it is somewhat seedy. The tree is similar to ‘Telfair’. ‘Thomasville’ is considered edible at full maturity, but “edibility” is relative, as few people can be convinced to taste it a second time.

All in all, the citrangequats are very ornamental and cold hardy and should succeed wherever kumquat or trifoliate orange can be grown.

“Three of them look great and have lots of fruit..  One died. Three of four olive trees died.  One sprouted from the ground and looks healthy.”