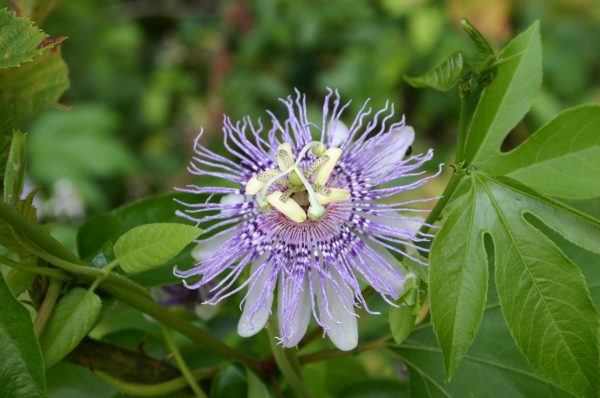 Contact dermatitis from exposure to certain plants can be serious business. We’re all familiar with the dermatitis resulting from touching poison ivy but other plants can cause a reaction as well.

My son got blisters on his arm from pulling lots of English ivy from a neighbor’s lot.

Now a close friend has developed a massive case or dermatitis from pulling evergreen passionvine, Passiflora caerulea, out of her landscape. Within a day of her work, festering red splotches appeared on her skin. They did not itch like poison ivy (which was not present in her vine area) but rather burned and stung at the slightest touch. Her only relief came from Milk of Magnesia dabbed on the eruptions plus ice packs on the “hot” areas.

I can find few online citations for passionvine dermatitis but plants in the species contain many chemical compounds, both harmful and helpful.

Email me if you have had dermatitis from passionvine (or any other landscape plant).

Stacy M. reports: I just broke out in the same kind of rash after taking a small dose of Passion flower tincture (for mild anxiety).  It is a blistering rash the same as the pictures.  It came within one hour of taking it.  It didn’t touch my skin.  (and see this same complaint from someone else)

Ken M. adds: I am so happy to now know what is causing a red rash on my arms. I pulled passionvines off of my rosemary plants in my flowerbed. I started seeing a red rash on one arm the next day. It got worse so I finally went to see my doctor. He diagnosed it as a contact allergy and told me to take Allegra and prescribed a cream to rub on the rash. I now have red  rash patches on both arms. Now I finally think I know what caused my rash!