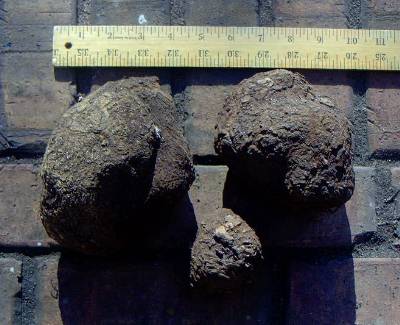 Q: I was digging up a Carolina cherrylaurel and these were nestled in the root system. The color and texture seemed identical to the major roots yet there was no connection. An inadvertent shovel cut revealed a white pulp inside. Are these a type of fungus?

“From external appearance, they look like earthballs, truffles or false truffles. All look similar on the outside. The fact that he found them underground eliminates earthballs.

“Both real truffles and false truffles are found underground. Real truffles are very rare in North America except in California and Oregon. Although in Georgia we do have pecan truffles that grow only in pecan groves.

“I would say it is a false truffle (there are many different kinds of false truffles). In Mushrooms Demystified, David Arora says: “The fruiting body of a false truffle is typically potatolike: round to oval or knobby with a tough or cartilaginous to rubbery or gelatinous interior.”

“One of the best ways to separate a false truffle from a real one if you don’t have a microscope is to look inside. The interior of a false truffle can be described as one of the following, gleaned from several mushroom books:

• It is often composed of small chambers that give it a spongelike appearance (a fine-textured sponge, not folded dough.)

• Some false truffles contain an internal stalk or column.

• If the interior of the “truffle” releases copious juice when cut open, or is firm to solid and resembles glistening rubber the fungus is likely to be a false truffle.

• While many truffles will develop distinctive odors as they mature, those that are considered false truffles may have a disagreeable odor rather than a rich mushroomy odor.

• True truffles usually have channeled, marbled or hollow interiors and do not have an internal column.

” The fact that when cut, this specimen had a white pulp, rather than a marbled interior or a column also shows that it is a false truffle. False truffles are terribly under-studied and many are un-named.”