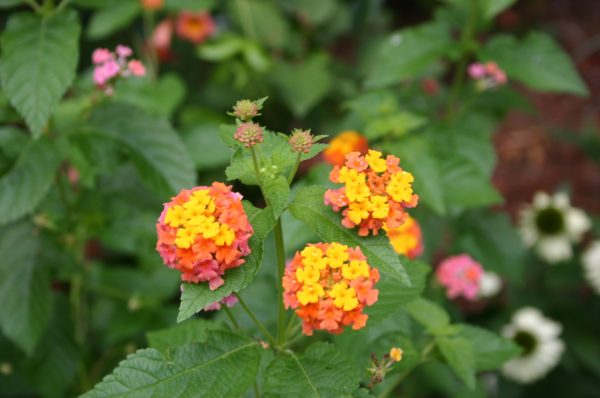 Most varieties of lantana, including ‘New Gold’, ‘Festival’ and ‘Tutti Fruiti’ are not winter-hardy in Atlanta. Rick Berry, the proprietor of Goodness Grows Nursery in Lexington, introduced ‘Miss Huff’ lantana several years ago because it can usually survive cold winters in Athens.

Dr. Bradshaw says “About the lantana ‘Mozelle’, I had a friend, Mozelle Smith, whose daughter lived in Texas (I think Houston). In one of her visits to Houston, she collected some young lantana plants growing along a canal. She brought them home and they survived several years, hardy right through our winters. When she told me hers were hardy, I said no, they must be coming up from seed. She called me over in the spring to see them coming back from winter-killed plants. They were indeed hardy. She gave me some for our botanical garden where they continue to grow today. After my friend died of brain cancer, we named the variety ‘Mozelle’ in her memory. We have since propagated it and shared it with the nursery trade.”

Funderburk testifies that “Our lantana ‘Mozelle’ has done well in Stone Mountain for three growing seasons. It grows about three feet tall and spreads out at lease five or six feet. Each late winter I cut it back almost to the ground and it comes back vigorously.”