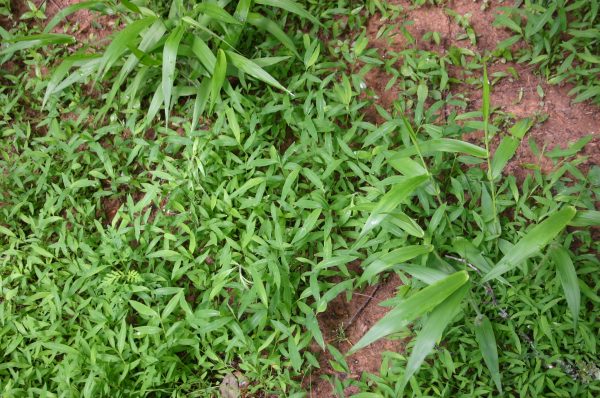 This grassy weed is common but it doesn’t yet have a widely accepted common name. Most gardeners refer to it as “That summer weed that I can easily pull out by huge handfuls but it still comes back!”

Eulalia grass (Microstegium vimineum) tolerates shady spots handily and is most often found where the soil has been disturbed. Garden edges, underneath newly planted shrubs and at the edge of a new homesite are routine habitats.

Basketgrass is a weed I have been battling for years. Gardeners report that they can easily pull huge baskets of the pest from amongst shade-loving flowers and shrubbery. A few weeks later, though, the grass returns, undaunted by our efforts to eliminate it.

Eulalia is native to the Orient. It was first identified in Tennessee in 1919. It has spread throughout the East Coast in subsequent years. It can be found along any creek in Georgia and in shady landscapes where the soil stays slightly moist. My guess is that it once grew in the shade of kudzu and they learned their invasive natures from each other.

Since it has no natural enemies, eulalia can only be managed by pulling it by hand or using herbicides. (But see this new research on a disease that kills it!)

will prevent microstegium seed from germinating. Since seed germinate throughout the summer, two applications (mid-February and early May) are appropriate. For a heavy infestation a third application in July might be warranted. Read and follow label instructions.

will kill the weed when it is growing among ornamentals. Read the label carefully to determine which plants it is safe to spray onto.

dispatch the weed easily. This might not be the best course though, since killing the weed leaves a bare plot of soil where other weeds can sprout.

If one sprig of the stuff is left untouched, the pest will be crowding your hosta and ferns within a few weeks. 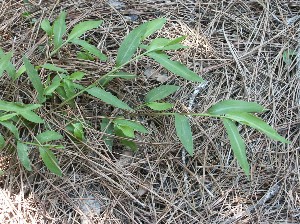 Any shady garden is likely to have this weed.