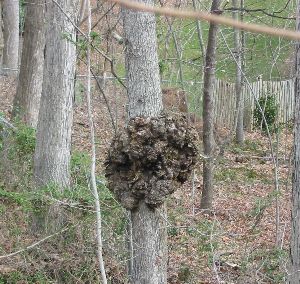 Q: What in the world is this on our tree? It’s been there for as long as I can remember – since before 1990. It grows a little each year. The tree seems unaffected. If it is a burl, how do we harvest it?

A: The malformation is caused by crown gall, a bacteria known as Agrobacterium tumefaciens. The bacteria infected the tree through a wound and slipped some of its DNA into the tree cells. The cells then began multiplying out of control, much as a tumor or cancer would act in a mammal. (Good news: this bacteria DOES NOT cause tumors in humans or animals).

The ability to move DNA into plant cells was just a curiosity until plant scientists needed a way to genetically modify plants. In an “Ah Ha!” moment, they realized that crown gall bacteria could be used to make plants resistant to herbicides or to make plants produce their own insecticide. ‘Flavr Savr’ tomato, ‘Roundup Ready’ soybeans and ‘Bollgard’ cotton are the result.

The crown gall on your tree may make it weaker at that spot or it may interrupt water flow to the leaves. ……. or you may see no damage at all.

Doug Hall at Highland Hardware says burled wood is used by woodworkers but it is so common it won’t bring you much money. Leave the tree alone and let it be a focal point in your landscape.