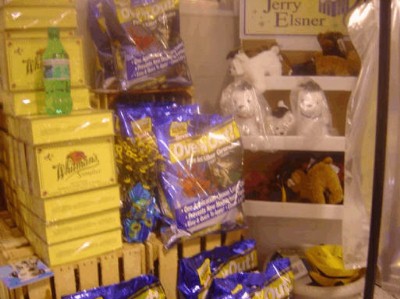 Q: Can pesticides be stored near food?

A: Pesticide expert Dr. Paul Guillebeau recently saw something that gave him pause.

“I took this picture at my local grocery store just to make our less intelligent readers feel better about themselves. The picture is not staged. The grocery thought it was a good idea to display pesticide between Whitman’s chocolates and stuffed animals.

“To make matters worse, it was nearly impossible to convince them of their mistake. The first day I saw the display, I talked to an assistant junior manager. I explained to him what I do and why they were making a big mistake. He looked sincere, but nothing had changed by the next week.

“This time I called and talked to a more senior assistant (at least his voice had changed). He sounded sincere, but nothing changed.

“When I next visited the store, children had obviously been playing with the toys and had stuffed some of the animals among the pesticide bags.

“I knew it was dangerous, so I quickly brought my children into the store, but I was not rewarded. As teenagers, they said they felt dumb playing with stuffed animals, and neither of them got sick. I bought my wife two boxes of chocolate, but she did not develop even a sniffle.

“Since my family would not cooperate with grounds for a lawsuit, I called an inspector with the Georgia Department of Agriculture instead.

“It was never my intention to squeal on the store, but they would not listen to an ordinary professor. I cannot wait to see what happens this spring.”