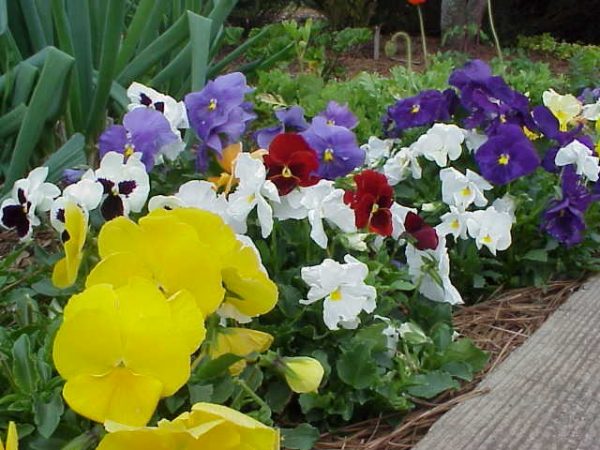 Few plants create color in a winter landscape better than pansies. Given a mid-October planting, pansies laugh at temperatures in the ‘teens. They are even known to bloom after a winter snowstorm. Growers produce 50 million pansies each year for the North Georgia market. Now is the time to concentrate on planting pansies well so they will reward you with bounteous blooms this winter and next spring.

SOFT SOIL In order for pansies to do their best, their roots must establish themselves quickly in your soil as it begins to cool. Imagine their difficulty trying to push through hard clay dirt! A pansy bed should be at least 25 percent composted material mixed with your native soil. A good recommendation is to pour one bag of soil conditioner over 10 square feet of bed and mix it into the soil eight inches deep.

SIZE DOES MATTER You’ll find more than one size of pansy plants at local garden centers. They offer 3 inch pots, four inch pots and six-packs of pansies from which to choose. It pays to know which size performs best in your area. South of Atlanta, where the fall tends to be a bit longer and warmer, the smaller plants in a six-pack have a few more days in which to grow roots large enough to support blooms for the winter. Planting those same six-pack plants in the colder parts of North Georgia would yield few blooms until the soil warms again in March. That does not mean that the smaller plants should never be planted – only that they take much more time to grow to a size that produces blooms. For the suburban Atlanta area, pansies that are sold with eighteen plants per plastic flat are most successful for prolonged blooms.

FEED REGULARLY – WITH THE RIGHT STUFF Since pansies will soon be growing in cold soil, their fertilizer needs will be quite different from flowers that grow during the summer. Summer fertilizers have urea, ammonium nitrate or some other source of nitrogen for the plant. That’s fine during the summer when the soil is warm. But in the winter, nitrate sources of nitrogen are better for plants. Look on the label of your fertilizer – if it says some of the nitrogen comes from nitrate, your pansies will benefit. Right now, you can use any of the water-soluble, powdered fertilizers (Miracle-Gro, etc.) to drench the soil around each plant once it is in the ground. When you fertilize monthly from November through March, nitrate-containing fertilizers would be best…..but if you can’t find a product with nitrate, anything is better than nothing.

TINY BIT OF PROTECTION Pansies protect themselves during cold weather by temporarily wilting. The dry leaves are not damaged by cold; they recover nicely when warmer temperatures appear. But if the soil is frozen while dry, frigid winds howl across the leaves, pansy roots are unable to transport water back to the leaves. For this reason, keep a bale of pine straw handy during the winter. If a Siberian Express is forecast, cover all of your beds with a thin layer of straw. It will hold heat in the soil and it will shelter pansy leaves from the harsh winds.

Success With Pansies in the Landscape