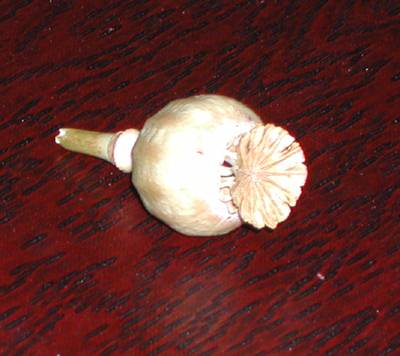 Q: A friend gave this seedpod to me, and it was filled with little black seeds. Do you have any idea what it is and where it grows? I was wondering if there is a chance we could get some of the seeds to grow.

A: You have the seedpod of Papaver somniferum, opium poppy.

On the other hand, if you *know* the pod can be used illegally, you can be charged with possession of a controlled substance.

It wouldn’t hurt to check with a lawyer before you plant the seed.

“Walter, a thing called scienter (guilty knowledge) is required to be present in a person’s mind to make their actions a crime. As a practical matter, in crimes of possession, the burden is shifted to the defendant to prove that he did not and could not have had guilty knowledge. It’s hard to prove that you did NOT know something.

“The term “trafficking” means that you have so much of the stuff, or have it packaged up in such a way, that the government can assume that you were gonna sell the stuff to others for illegal purposes. But for the “war on drugs”, it might well be assumed that those poppy seeds were just going to go to Aunt Gladys’s flower bed.

“Those who grow commercially available seed and do not have actual knowledge of the nature of the seed and can PROVE IT, have nothing to worry about. That means anyone old enough to know about things like laws should not grow poppies, which is a shame, because they’re the some of the prettiest flowers around, right up there with peonies.

“Your enquirer should be told the identity of the seed pod and that if it weighs in at more than 4oz, that they can be charged with trafficking drugs, IF they know what it (the pod) is. (Which guilty knowledge you, Walter, have presumably just bestowed upon them.)”