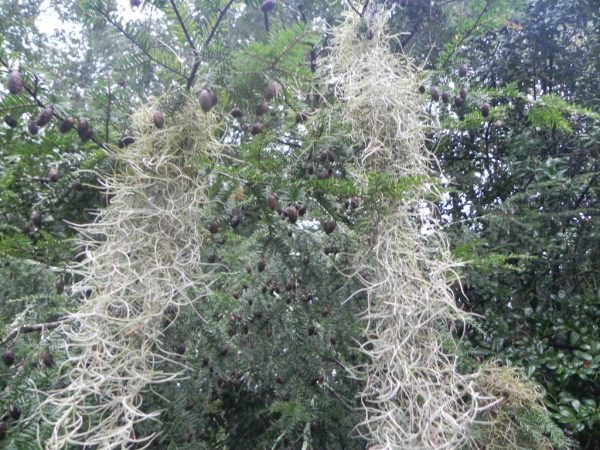 Q: Is there a way to grow Spanish moss here? I have seen yards in the area with moss but it seems its growing on a certain kind of tree.

A: Spanish moss is not a true moss. It is an epiphytic plant, meaning it grows on another plant but does not rely on the host plant for nutrients. Epiphytes make their own food, using nutrients dissolved in rain water. As you’ve observed, Spanish moss grows best in areas of high heat and humidity, of which we have lots in summer. However, it does not like cold weather. Temperatures in the twenties will kill it.

That said, it has been reported growing as far north as Virginia.

It’s possible your neighbors are bringing it back from summer vacation and draping it in their trees for temporary effect.

A reader update: I wanted to comment about growing Spanish moss in the Atlanta area. It is possible for it to survive and grow here, although I have never had much luck getting it to spread beyond where I have placed it. I have some Spanish moss growing in a water oak here in Atlanta that had been growing in a mock orange bush there for several years. My main problem in keeping it there was the birds, who loved it to make their nests each spring. The one sprig I had left was hidden among the leaves of the mock orange.

Another update: This Spanish moss spread from one strand I picked up off a cart path at St. Simons in about 2013. I live in Marietta. When it starts scraping the ground I pull some off and move it higher. We have a sprinkler system which waters it twice weekly. Seems to like some sun.