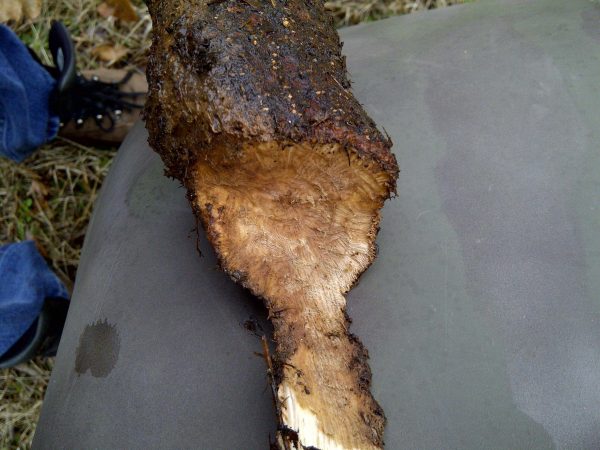 Q: Two years ago I planted 4 sawtooth oaks. A few weeks back I noticed the 2nd largest tree leaning over and something had gnawed it in half 3 or 4 inches below grade. I would assume from the marks it would be some kind of rodent. I’m concerned now that the culprit will begin attacking my fruit trees.

A: You have an excellent example of vole damage!

Voles love to run along under the mulch (or just below the soil)and feed on plant parts that are right there at the soil line.

Here are some suggestions:

• Make a “fence” out of hardware cloth and wrap it around the base of woody plants to deter the animals.

• Pull the mulch about 4 or 5 inches away from the base of your trees. Then, in order to feed on your plants, the voles will have to come out into the open -they don’t like to do that.

• Look for runways and gently pull back the “roof”. Find a large cardboard box and remove the top. Bait a mouse trap with peanut butter and place it in the vole path. Cover the trap and runway with the upside down box or overturned gallon pot. The voles will be more likely to venture into the covered area to investigate the nice peanut butter smell if everything is covered. When you’ve caught a vole, remove the trap and replace it with a slice of apple. Check it a few days later to look for toothmarks. If the apple is gnawed, bring the trap back into use.

Since you have a large area to cover, get a half dozen mouse traps and bait with apple or peanut butter. Cover them as described and check every few days. Keep trapping until you see no gnaw marks on apple slices placed under the cover.