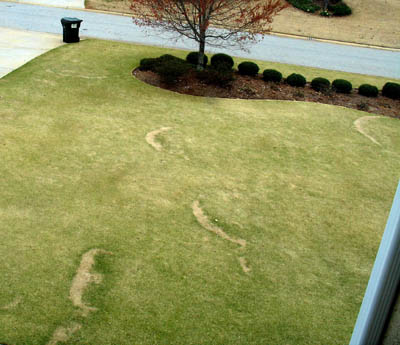 Q: This zoysia lawn is 11 years old and I cut it with a reel mower, do as little watering as possible and when I do, I water deep and early in the morning. I aerate yearly and vertical cut every 3 or 4 years.

I started seeing this problem about 4 years ago. It stays in the exact shape and position except where it has spread. That is to say that the first year I saw it, it came back the next year in the exact same place and shape, but then a second area might appear nearby. As the season progresses, the areas slowly fill in.

“The symptoms depicted in the pictures look like fairy ring. Fairy rings are caused by soil fungi, producing rings or arcs as they slowly decompose organic matter. I’d class this as a type I fairy ring. Due to their soil-inhabitant nature, they will appear at the same location and slowly expand from these areas (which is what is happening at this location).

“Disease management: can be disheartening sometimes; fairy rings thrive on organic rich soils (they are wood decay fungi in nature) therefore anything you can do to change the organic content in the soil will be helpful. Masking symptoms by fertilizing around the arc sometimes is appropriate. Regular core aeration and dethatching will help tremendously.

“A radical approach might be to dig the fairy ring out. A band of soil about one foot on either side of the ring should be removed to a depth of 8 – 12 inches. Fill the hole with good topsoil soil and resod the area.”

Most fungicides do not control fairy ring, but see below: