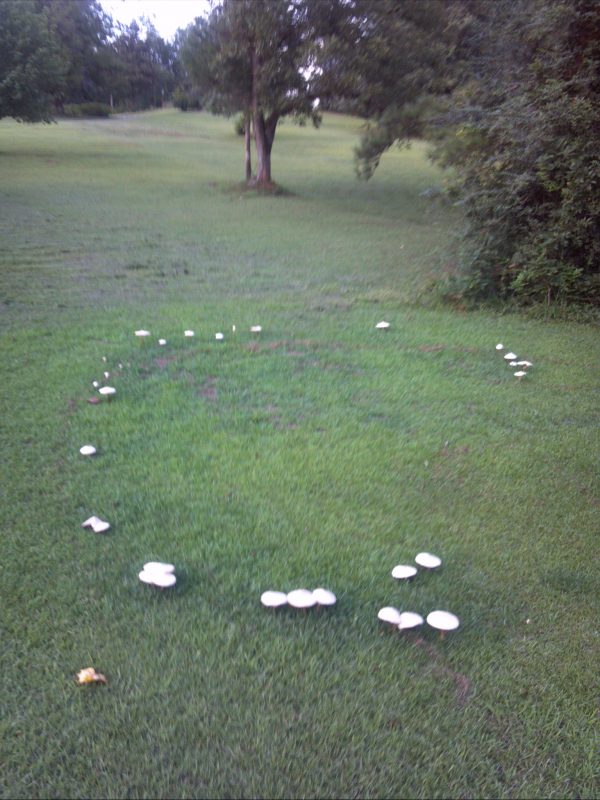 Rain in summer is appreciated but some folks receive unexpected lawn visitors as a result.

T. S. writes that his lawn is in excellent condition – green, thick and low. “In the middle of my lawn, however, I have a tree island that used to house a forty-foot tall Bradford pear. It was lost to a storm last spring. My problem is this: in a circle around the island, the grass is more yellow than green, not nearly as thick, and just doesn’t look as healthy. It seems less drought resistant that the other parts, drying up very quickly, but even regular watering has not helped to improve the color. My guess is that those Bradford roots are still sucking nutrients. Am I correct?”

He didn’t realize it, but T. described the classic symptoms of fairy ring. This condition is caused by several different species of fungi which specialize in breaking down buried organic matter. My guess is that the roots left by the former Bradford pear have made quite a meal for fungi. As they consumed the roots (and perhaps the thatch under T.’s lush Bermuda grass), the fungi spread their white, waxy mycelia (“roots”) through the soil. The mycelia impede the movement of moisture and nutrients, which causes nearby grass to suffer.

MUSHROOMS T. will soon likely see another characteristic of fairy ring: mushrooms. Once the fungi have absorbed sufficient nutrients, their thoughts turn to reproduction. A mushroom is nothing but the “flower” of an underground fungus. Once it emerges from the ground, spores are released from the gills of the mushroom. The spores are scattered by the wind and are ever-present throughout our landscapes.

There is no way to eliminate mushrooms (or their spores) from a lawn. Most folks just pick and discard them or practice their golf tee shots on the toadstools. If only the fairy ring is noticeable, T. should stretch a soaker hose over the yellow grass and soak it for an hour each week. Sprinkling some water-soluble fertilizer (Miracle Gro, Peter’s, etc) onto the grass will make it green again until the fungus gradually disappears.