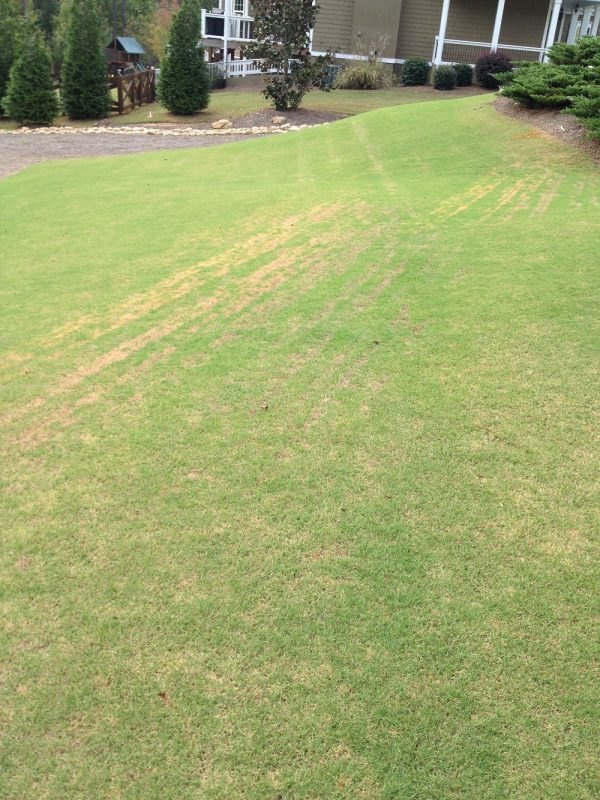 Q: We have a Zeon zoysia lawn and I am stumped.These start out with one blackish spot and then about 24 hours later we have a STRAIGHT brown strip. We have tried various fungus stuff but nothing touches it. A couple of days later another brown straight stripe appears. It is only in the backyard and generally twice a year in the same year. Once it is brown the zoysia grows back and it eventually will disappear. Two years in a row. Never in the front lawn. Warren S.

Q: We have lived in our home in Coweta county for 4 years. Every fall we have the same line pattern of what looks like dead grass in zoysia and we cannot figure out why it is happening. The first year we saw it, we thought it may have been from the chemicals on the lawn companies hose. It keeps coming back every year in the same spot. Aimee N.

A: Close your eyes.

If you listen closely, you will hear the sound of three turfgrass experts simultaneously scratching their heads.

Clint:
There are some things that seem odd. The “black” can be consistent with fuel / spilled gas damage. It’s not the “typical” patterning of large patch disease.

Alfredo:
I concur with Clint. “Straight lines” symptomatology is indicative of an abiotic issue rather than biological in nature. Scalping or tracking of some sort, is my best guess. Second possibility but still related = Stressed grass then overcome by saprophytes or weak pathogens (curvularia, bipolaris etc). It’s not consistent with Large patch symptoms

Does the affected area green-up well then decline? or it never greens up? This might tell us if problem happened in the fall or winter or if new during spring time

Bobby:
I have often seen my customer disease ID samples returned with the pathogens noted as Curvularia, Drechslera and/or Bipolaris. Many times the damage would be consistent with that in these pictures. I have theorized the condition is stress related . Initially it is caused by anything that stresses the lawn: drought, high temps, infrequent mowing, scalping, soil compaction etc. Interestingly the turf is often reported as appearing black. I have noted that the initial tan discoloration of fine blade Zoysia varieties will indeed appear black following heavy dew or any rainfall. These conditions are usually noticed by the customer when the lawn has received rainfall or irrigation following a few days of dry conditions or other stressors as noted. Soil compaction may be the underlying culprit as noted by Warren’s comment:  “It is only in the backyard and generally twice a year in the same year. Once it is brown the ZEON zoysia grows back and it eventually will disappear. Two years in a row. Never in the front lawn.”