In a great example of public service, the California Department of Pesticide Regulation collects and releases example of people mis-using pesticides.

Some typical cases: In Los Angeles, a woman borrowed a half-cup of pine oil disinfectant from a neighbor and then left it on a kitchen counter. Her three-year-old daughter mistook it for apple juice and drank it. In Stanislaus County, a six-year-old girl made mud pies in a snail bait container, then ate part of the mixture and began vomiting. In other cases, children sprayed siblings, playmates, or themselves in the face with pesticide aerosol cans after adults failed to put the cans away or carelessly discarded them.

Home pool chemicals are another source of injury to both children and adults. In Kern County, a teenager began suffering respiratory problems while sunning herself near the pool chlorinator that her father had refilled earlier in the day. A Shasta County homeowner left an open bag of chlorine granules beside a wading pool. The next day, her three-year-old daughter ate some of the granules and received medical care for abdominal pain and vomiting.

Excessive application is a major factor in home pesticide accidents, since many people seem to believe that if a little chemical does the job, then a lot must be even better. That misconception seems to hold especially true for insect foggers, better known as “bug bombs”. Southern California has been the scene of repeated, spectacular explosions that occurred when consumers over-used foggers while ignoring precautions to extinguish pilot lights and other ignition sources.

Aside from sonic-like booms that broke windows and doors, DPR and the poison control system found a dozen cases in recent years where fogger misuse resulted in personal injury. In at least two cases, people set off the foggers, then exposed themselves to fumes when they reentered their residences to retrieve pets. One user tripped over her cat as she activated a fogger and sprayed herself in the face.

None of the following cases resulted in death, although most victims required medical treatment. (State privacy law protects their identities.) Cases were compiled by DPR’s Pesticide Illness Surveillance Program. In no particular order, the “top 30” are:

1. A Contra Costa homeowner discovered sewer rats were entering his home through a toilet. He bought an incendiary device intended for gophers and other burrowing pests, and dropped it down a plumbing vent on his roof. The device melted a plastic elbow in the pipe and the roof caught fire, causing $80,000 in damage before firefighters could extinguish the blaze.

2. A Riverside County woman set off four foggers in her 1,000-square-foot apartment (about three cans more than the recommended application) and left the residence (as the label instructed), only to reenter several times to pick up things she had forgotten. She began to experience dizziness, nausea, and cramps, so she called 911. Upon arrival, a paramedic attempted to retrieve the fogger without wearing a respiratory protection device, and he too became ill.

3. In Stanislaus County, a 38-year-old woman found a home remedy for head lice on the Web. She then applied eight ounces of dog flea-and-tick shampoo and olive oil to her scalp, and wrapped her head in cellophane for five hours. Her scalp began to itch and burn. She felt shaky and also experienced nausea and drooling.

4. In San Joaquin County, a 23-year-old man spotted a fly on his beer can, and sprayed an insecticide on the can. Later, as he drank from the can, his lips began to tingle.

5. An 18-year-old Lassen County resident sprayed half a can of outdoor-use insecticide in his bedroom, then went to sleep. He awoke with nausea, vomiting, dizziness, sweating, abdominal cramps, diarrhea, and other symptoms. He denied his sister’s allegation that he was sniffing the insecticide.

6. A Placer County man was spraying his yard with the insecticide diazinon when he stopped for a chew of tobacco, placing the wad into his mouth with an unwashed hand. He began vomiting, salivating, and experienced shortness of breath.

7. A Sonoma County apartment resident sprayed three aerosol cans of lice treatment on his bed, then went to sleep. He awoke the next morning with a headache, nausea, and vomiting. He did not read or follow the product label directions and told investigators he assumed the more he used, the more effective it would be.

8. In Los Angeles County, a woman diluted bleach in a cup to clean it, then forgot about it and went to bed. The next morning, she warmed the cup of liquid and took a sip before remembering the cup contained bleach. In a similar incident, a Sonoma homeowner left a cup of bleach solution that she had used for cleaning on her bathroom counter. She got up at midnight and drank from the cup. Her throat began to burn and she vomited.

9. A Tuolumne County homeowner tried to kill a spider in a cupboard by spraying it with insecticide. The woman then stuck her head in the cupboard to determine if the spider was dead. She began coughing and vomiting from the fumes. In a similar case, a San Joaquin County, a man stuck his head inside a cupboard to determine if the insecticide he had sprayed on ants was working. He developed a mild headache, dizziness, and respiratory symptoms.

10. A San Francisco physician over-treated his closet with mothballs. When he wore clothes from the closet, he began to feel dizzy, nauseated, and suffered loss of muscular coordination. The first time, he recovered in fresh air. The second time, he went to an emergency room and was hospitalized overnight to rule out a stroke before the problem was traced to excessive mothball fumes.

11. As a 34-year-old Yolo County motorist moved her driver’s seat backward, the motion caused an insect fogger stashed underneath the seat to discharge. She inhaled the fumes and immediately sought medical attention.

12. A mother in Merced County found a cough medicine bottle in the storage shed. That night, she gave 1/4 teaspoon of its contents to her son. When he reacted badly, she smelled the bottle and realized it contained an insecticide, which a relative had given to her husband.

13. A painting crew applied a wood preservative to a fence between two properties in Los Angeles County. The neighboring homeowner smelled a strong odor and became ill. The property owner diluted the wood preservative with paint thinner, contrary to label directions.

14. While cleaning mold underneath the kitchen sink, a 23-year-old resident of Los Angeles County inhaled the bleach fumes and developed respiratory symptoms. He wore a military-type gas mask, but still inhaled the fumes. When his symptoms worsened, he sought medical attention.

15. A Los Angeles County homeowner saw a bug in her bathroom and sprayed it with a pesticide. As the bug kept moving, the 66-year-old woman kept on spraying — until the fumes overwhelmed her, and she immediately sought medical attention.

16. An elderly Fresno County woman entered her house to look for a cat after her son-in-law set off several insect foggers to rid the residence of roaches. She inhaled the fogger mist and began coughing. Her son-in-law called for an ambulance to take her to a hospital for treatment.

17. A Sonoma County man brought a 50/50 granular pool chlorine/water mixture home from work in a 16-ounce bottle. The bottle sat outside in the sun for a week. When the resident opened the bottle to pour it into his spa, the contents shot out under pressure and into his unprotected eyes.

18. A Los Angeles County tenant triggered three insect foggers in her apartment kitchen without extinguishing the pilot lights. As she opened the front door to leave, the material ignited and blew out her front windows. The 32-year-old woman was taken to a hospital with chest pain.

19. A homeowner in San Luis Obispo County mixed muriatic acid and diazinon into a hand pump sprayer in hopes of doing less work in his yard. When he pressurized the sprayer, it exploded. He immediately showered and sought medical attention.

20. A 35-year-old homeowner in Sonoma County noticed that her pesticide product had settled and solidified inside the container. She mistakenly shook the container without putting the cap back on, and some of the product shot into her right eye. She immediately flushed her eyes with water.

21. As a San Diego County man prepared to spray ants with insecticide, he failed to notice the aerosol can faced the wrong way. He sprayed himself in the face, developed respiratory symptoms, and sought medical attention the next morning.

22. In Los Angeles County, a woman sprayed an aerosol insecticide under her kitchen sink to kill roaches. To get a better shot, she stuck her head inside the cabinet and then inhaled fumes. Her lungs began to burn and she sought medical attention.

23. An Orange County resident set off two “bug bombs” and left his house. He returned 90 minutes later, opened the windows, and remained inside. He developed heart symptoms and went to a hospital, where he suffered a stroke.
24. Another Los Angeles resident who sprayed her kitchen to kill flies drank from a glass of water that sat uncovered in the same room while she sprayed. A runny nose, headache, and chest tightness prompted her to seek medical aid.

25. In Orange County, a dog owner with asthma hugged her one-pound puppy shortly after it received a liquid flea control treatment from the woman’s veterinarian. It was later determined that the puppy was treated with a dosage meant for larger dogs. The owner experienced shortness of breath, blurry vision, and other symptoms. The puppy also apparently suffered ill effects.

26. A San Diego receptionist sprayed an insecticide around doors in her office for spiders. She got the pesticide on her hands so she rubbed them together. She later rubbed her eyes. Her hands and eyes began to itch, so she sought medical attention.

27. A San Bernardino truck driver prepared to disinfect his tires with a hose-mounted sprayer. When he pulled on the hose, it knocked the attached disinfectant bottle off. The bottle hit the ground and disinfectant splashed into his face and eyes.

28. A Los Angeles County worker prepared to mop a kitchen floor when she noticed she was almost out of the usual cleaning product. She mixed bleach with the cleaning product, which created fumes. She developed respiratory symptoms and sought medical attention.

29. At a San Bernardino County fast-food outlet, a customer at the drive-through window bought iced tea and noticed a foul taste, followed by a burning throat and nasal passages. The cup apparently contained some sanitizer from an improperly rinsed tea machine.

30. A Marin County lifeguard mistakenly added muriatic acid to a chlorine tank. He inhaled the resulting fumes and developed symptoms. His mother saw him coughing and took him for medical aid. 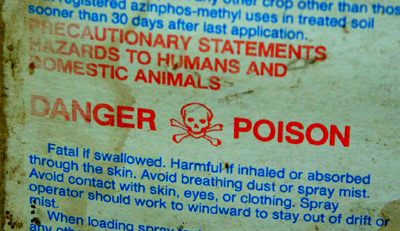