Solanum tuberosum
The potato ranks with rice and wheat as one of the world’s leading food crops. It is the number one vegetable crop, grown in nearly every country of the world. The potato is actually a shortened stem called a tuber. It contains dormant buds (eyes), which sprout to start new plants.

Potatoes originated in the high country of South America and were cultivated by the Incas. They made their way to Europe with the early Spanish explorers in the sixteenth century. After achieving wide acceptance in Europe, they reached North America in the 1700s and had become a staple by the end of that century. People in some parts of the world have relied heavily on potatoes. Their importance to Ireland was evident when early blight ruined the crop, causing the potato famines of 1845 to 1847. The results were starvation and mass immigration to this country. Potatoes continue to be essential to the well-being of people in some parts of the world, particularly Eastern Europe where they are the main source of carbohydrate. Potatoes are less important as staples in this country, but are very popular as snacks, chips, fries, double-baked potatoes, and side dishes. Health-conscious Americans equate potatoes with high calories, but the vegetables are not at fault. The butter and sour cream that are mounded on the spuds cause the problems. Potatoes are actually low in calories and fat, and high in vitamins, complex carbohydrates, potassium, and fiber.

WHEN TO PLANT
Although potatoes can stand a frost, a freeze will kill them. (With a frost, temperatures do not go below 32 degrees Fahrenheit, but water vapor crystallizes on surfaces. A freeze is colder than 32 degrees Fahrenheit, and water freezes.) Don’t be in a rush to plant them. If the soil is too wet and cold, the plants will not grow, and the seed pieces may begin to rot. If the weather is moderate and the soils are workable, plant “”seed pieces”” 3 or 4 weeks before the average date of last frost.

WHERE TO PLANT
Plant potatoes in a full-sun (8 to 10 hours will suffice) location that has well-drained and well-tilled soil. Hard, lumpy soil will result in poorly formed potatoes. If the soil is heavy or puddled (hard, compacted condition of heavier soil with a high clay content), incorporate organic matter and till the soil during the preceding fall. Allow it to remain rough over the winter to mellow it.

HOW TO PLANT
Potatoes are started from seed pieces, not from actual seeds. The seed pieces are sections of tuber 1 1/2 to 2 ounces in size to give the sprout enough energy for a good start. Do not save potatoes for seed because they may carry diseases. And do not try to grow plants from store-bought potatoes, which have been treated with sprouting inhibitors. Eventually, the treatment wears out and store-bought potatoes will sprout, but they will be delayed and are not certified disease free. To get the best start with your plants, buy certified seed potatoes from a reliable outlet. Seed that has already sprouted will develop faster and produce a bigger crop. Some gardeners intentionally sprout the seed potatoes before cutting them for planting. To follow that practice, spread out the seed potatoes in a bright, warm, humid place for 3 or 4 weeks. Cut the seed pieces a couple of days before planting, and spread them out to dry. Each piece should have at least 1 good sprout, and having 2 or 3 sprouts is even better. Be careful not to break the sprouts in planting. Apply a complete garden fertilizer, such as 10-10-10, at a rate of 11/2 pounds per 100 square feet of garden. Spade or rototill the soil.

In rows, space the seed pieces 12 to 15 inches apart, with 24 inches between rows. In a bed, space the seed pieces 12 by 18 to 24 inches apart, which will allow 2 plants across the bed. Plant them 2 to 3 inches deep with the eyes up, then cover them gently to avoid breaking off any sprouts. In soil that is very heavy, shallow, full of rocks, or poorly drained, grow potatoes above ground (called straw potatoes). Set the seed pieces at the correct spacing but gently firmed into the soil surface, then cover them loosely with 6 inches of clean straw. The potatoes will root into the soil, but the tubers will form at the soil surface.

CARE AND MAINTENANCE
When the sprouts are about 6 inches high, begin hilling soil around them. With a hoe, pull soil from the spaces between the rows, being careful not to dig too deeply and injure roots. The hills eventually should be about 6 inches high and 1 foot wide. Potatoes that develop in light will be green and inedible. Hilling covers them and also cultivates the soil to loosen and aerate it while eliminating weeds. Fluff up straw over the straw potatoes, and as it thins out, add more straw to cover the developing tubers. Potatoes develop better in moist, cool soil. Water to provide 1 inch a week if nature does not cooperate because drought seriously reduces production, and uneven moisture causes knobby tubers. Soil temperatures of 60 to 70 degrees Fahrenheit are optimum for tuber production. Pests and diseases may affect the plantings. Protect the plants from leaf hoppers, potato beetles, or flea beetles by applying an approved garden insecticide or using floating row covers. Avoid planting potatoes and other solanaceous crops (peppers, tomatoes, eggplants, etc.) in the same place in the garden 2 years in a row because these plants are susceptible to the same diseases. Scab is a common potato disease that causes a rough surface to the tuber. Buying resistant varieties is the best prevention. The disease does not develop in acidic soils, but most attempts to lower the alkalinity are usually less than successful.

ADDITIONAL INFORMATION
Harvest new potatoes about 10 weeks after planting. When the first flowers on the potatoes appear, small tubers are usually ready. If you dig to remove a few, be very careful not to damage the others. New potatoes are easy to find under straw; simply lift the straw and steal a few. Be sure to replace the straw, and try to avoid damaging the roots or other tubers. When vines begin to yellow, dig the potatoes as soon as possible because potatoes left in the ground after they are ready for harvest may be harmed by insects or diseases. Cut off yellowing, old vines. The potatoes are usually 4 to 6 inches below ground, so carefully lift them with a fork or spade. Start far enough from the row to avoid cutting into any of the potatoes. Harvest straw potatoes by collecting them from the soil surface. If the soil is in good condition beneath the straw, some tubers may develop in the ground; be sure to dig after them too. Spread the potatoes on the ground for a couple of hours to dry off before collecting them. Do not wash them or they will not keep. Store them in the dark in a warm place to cure for a week or so, then store them at about 40 degrees Fahrenheit for the winter. Always keep them in the dark to prevent them from turning green.

All Blue
100 days
Blue through and through.

Green Mountain
120 days
Heirloom, many misshapen tubers, but the best-tasting baking potato ever. 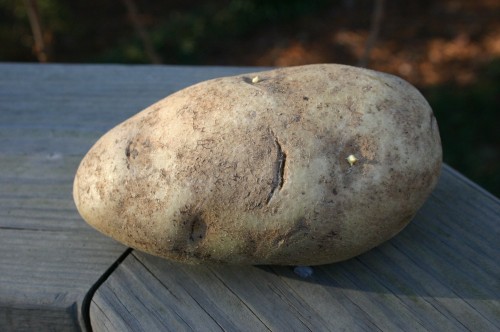 Tags For This Article: potato, vegetables