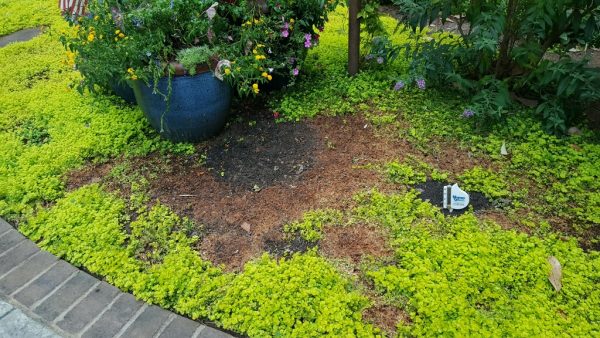 Q: My creeping Jenny is dying before my eyes. I see these tiny little brown beads on the ground and on the leaves. What is this and what can I use to stop it?

A: Your creeping Jenny has Southern blight. Look closely and you’ll see some “webby” stuff between leaves and stem and soil.

The webby stuff is called hyphae. They are the root strands of a fungus that’s decomposing the stems of your plants.

Southern blight fungus, Sclerotium rolfsii, is in most Southern soils. It attacks plants when they are weakened by shade, excess moisture around the stem or physical damage.

The small, light brown seed things are sclerotia, which are the structures in which the fungus overwinters. The sclerotia allow the fungus to survive for years in the bed.

Many plants, including hosta, impatiens, daylily, blue star creeper and ajuga, are susceptible to this fungus.

The disease needs warm, humid, moist conditions. As air temperature cools, it will slow its growth and eventually stop. Then next year, it will come back in July.

Dig up the dead plants and place them and the top couple of inches of soil in the garbage. Then, dig and flip the soil so that the soil surface is buried 6-8 inches deep. The pathogen needs oxygen and only infects at the soil line. If the hyphae and sclerotia are buried, then it won’t infect. You can add new soil to the area and replant.

There is no easily available homeowner fungicide for controlling Southern blight. The best control is to maintain an environment favorable for your plants and unfavorable for the fungus: don’t water frequently, change water drainage patterns and add gritty sand or expanded slated (PermaTill, Soil Perfector) to the soil if you think it doesn’t drain quickly enough.