Q: All of a sudden in the last month our indoor houseplants have taken on a nasty rotten egg type smell.

Three weeks ago after we realized it was coming from the plants we repotted them with new dirt, new stones, new pots, everything!

The plants seem healthy but the brand new soil is again giving off a nasty smell, almost like a backed up sewer when the p-trap runs dry. Any ideas?

A: I remember that same smell coming to my nose when I was asked to diagnose the troubles of a big houseplant in a DeKalb County official’s waiting room.”Her daughter gave it to her when she won re-election”, the staffers nervously told me. “She’ll KILL us if it dies!”

I pulled the plant from its pot.

The roots dripped copious amounts of dark, stinky water back into the container.

“Who’s been watering this?”, I asked.

Four hands from four employees shot into the air.

“That’s the problem!”, I lectured them. “In your effort to make sure the plant never wilted, it has been watered WAY TOO MUCH!”

I detailed one of them to take it home and repot it into dry potting soil. I didn’t hear back from them. Either the official disposed of the employees’ bodies quietly or the plant recovered.

Stinky soil always means too much water has been applied…the bacteria that causes the smell can’t live without excess water.

I recommend you re-pot the plant again and use a high-quality potting soil when you do it. Water ONLY when the soil is dry to the touch. 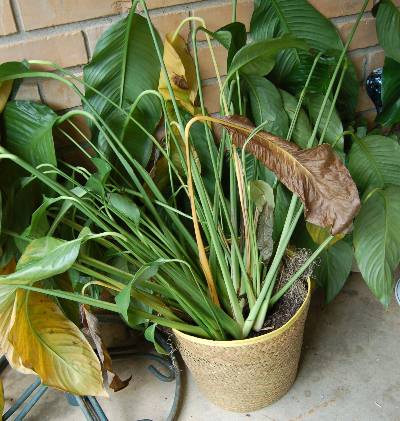 Tags For This Article: watering