When I posted photos of a kingsnake killing a copperhead, I had no idea how many responses I would get. From Scott W., here’s one of the most unusual!

I really enjoyed the story of the Kingsnake but I have one of my own…..

My wife and I moved to Villa Rica about five years ago from Las Vegas, NV. We lived there for 23 years. We had a Rhus Lancia (African Sumac) tree in our front yard where a Roadrunner lived. He had built a nest of coarse sticks in the lower branches and roamed around our back yard cleaning the yard of lizards. We had a Modesto Ash in the back yard that he liked to walk around and get grubs, along with the assortment of sparrows on the ground.

When the roadrunner gets excited as he did with the sparrow capture, the feathers on the side of his head would part and you could see his skin….. red, white and blue colors. And the roadrunner would strut…. not going anyplace, just proud and strutting with his head feathers parted.

One day I saw the roadrunner sitting on a pillow we had on our patio swing with a bird in his mouth. Upon closer looking, the bird was a hummingbird! How he was able to capture that hummingbird I do not know, but I was able to get my camera and take his picture through my kitchen window.  Notice the red, white and blue skin on his head! 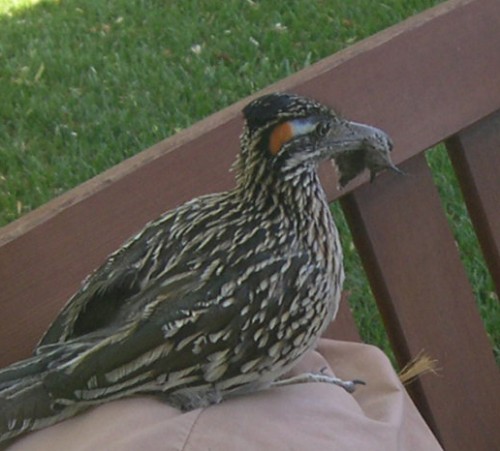 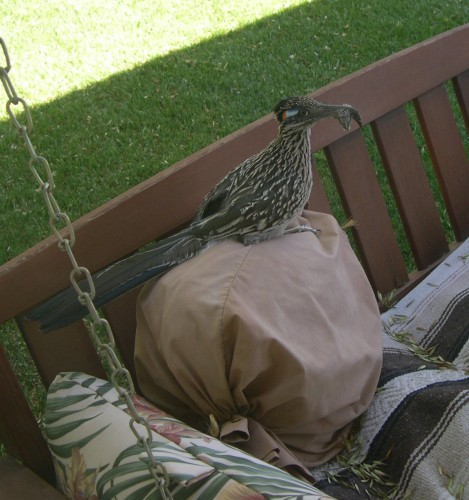 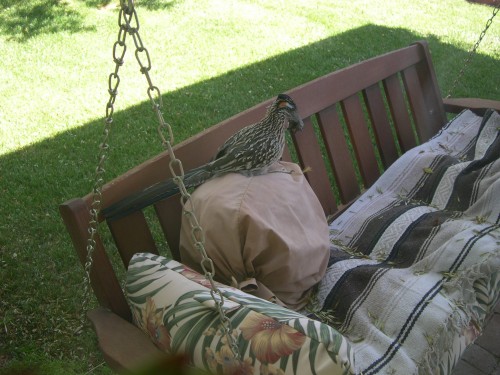 Tags For This Article: hummingbird, roadrunner