I recently received a query that has been repeated over and over this spring. A gardener in Roswell asks for my advice on the proper pruning of her Bradford pear tree in order to avoid limbs breaking as it gets larger.

The gardener, I’m sure, has been admiring the gorgeous clouds of white blooms lining the streets of metro Atlanta this spring. She’s smart, though, to have noticed that Bradford pears seem particularly prone to splitting apart during storms. Big limbs, even entire trees, lie broken after our yearly spring tempests.

Bradford pears are a victim of their own vigorous growth. Every twig and limb seems convinced that it can head for the sky immediately after it sprouts. The result is many vertical branches crowded around the trunk, all reaching heavenward. Simple physics explains that the attachment of a vertical branch is weaker than one which extends at an angle more toward the horizontal. Though the upright oval form of this tree is attractive, the means by which it is achieved leads to weakness.

In addition, so many branches sprout from a trunk that they eventually crowd each other for available space. After ten to fifteen years, large branches on a Bradford pear begin to split and fall if the tree has been left unpruned. The best time to prune a Bradford pear is in the first few years of its life in your landscape. If you wait much longer, limbs will grow too large and their removal could ruin the shape of the tree. This is an excellent time to grab your pruning tools and help your Bradford pear live long and prosper.

1. Take out any branch that is dead or dying.

2. Select the strongest and/or tallest trunk in the center of the tree to be your central leader. Shorten by half any other branch that is trying to grow parallel to the leader.

3. Prune out the weaker of any two branches along the central trunk that have sprouted within 15 inches of each other. Midcap explains that in five years, pencil thin twigs will be five inches in diameter. When two big limbs grow closely together, either or both are weakly joined to the trunk.

5. Try to leave only the branches that grow from the trunk at a 45 degree angle or more; these will be most strongly attached. HINT: You can make wooden spreaders from strong dowels to force adjacent limbs apart permanently. Wedge a spreader between branch and trunk to guide limbs to a proper clearance.

PRUNING OLD TREES An unpruned Bradford pear tree planted five or more years ago is likely to be a tangled mass of twigs and big limbs. With careful observation, you can still decide which limbs should stay and which should go. First to go are the thin vertical limbs in the center of the tree. They provide few blooms and impede air circulation through the tree. Next out are the major limbs that are spaced too closely together along the main trunk. When choosing between two limbs, keep the one that grows more horizontally. Remove the large limbs now, before green leaves appear and they become even harder to manage. Use the “three cut technique” described below to avoid tearing off bark below the limb.

THREE-CUT TECHNIQUE TO REMOVE LARGE LIMBS You can seriously harm the tree (and yourself!) if a big limb is cut carelessly. If only one cut is made next to the trunk, the limb will sag before the cut is complete and strip bark off for a distance down the trunk. It is best to cut the limb once from below and then from above, a couple of feet from the trunk, allowing most of the limb to fall away. The stub that is left can be removed with a single cut just outside the branch collar on the trunk.

TOO MUCH IS JUST ENOUGH If you follow the steps lined above, you might be concerned about the mass of limbs that is piled on the ground after the job is complete. Ignore the shrieks from your spouse and the jibes from your neighbors. The clouds of white blossoms that grace your Bradford pear may be slightly diminished the season after pruning but in succeeding years the blossoms will return in full force. And the wails of your neighbors, whose unpruned Bradford pear limbs have fallen across their new SUV, will be music to your ears! 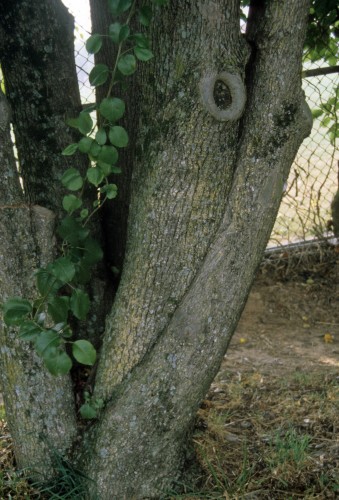 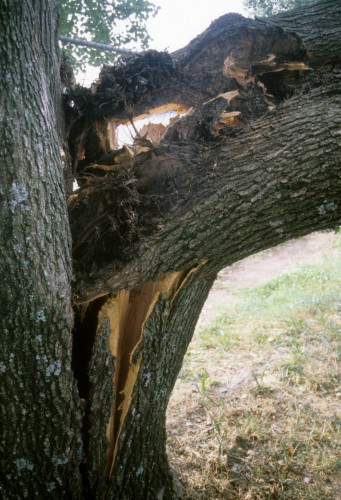 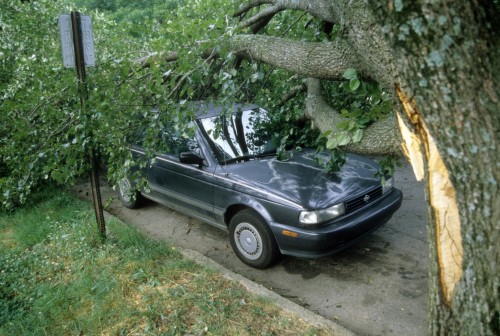