The best way to tell the difference, aside from examining the branches and looking for spores, is to run your hands across the branches of newly affected trees. If the needles fall off upon touching, then it is Seridium and if they stay attached then it is Botryosphaeria.

Using this method, you will probably be right almost 100% of the time. The reason is that Botryosphaeria cankers expand to girdle the branch, which when it gets large enough, kills the branch fairly quickly. Hence the needles remain attached.

However for Seridium canker, the cankers don’t enlarge to girdle the branch. Rather the cankers enlarge longitudinally, with multiple cankers developing around the branch. Collectively the cankers interfere with water flow and the branch wilts, yellows, and eventually turns brown. Because of the lack of water, the symptoms often resemble drought stress, and the needles will fall off when touched. Also Bot canker tends to affect one or two branches in a localized area, such as at the base of the tree or where the tree was pruned or injured from ice storms, etc.

Seridium canker is often the result of drought stress or some other kind of stress that weakens the tree. Infection requires a wound, but it appears to also enter through lenticels, although I was never able to conduct an experiment to prove it. As a result of this infection, Seridium cankers often appear randomly distributed across the tree canopy, with some appearing yellow, some light tan, some brown.

All Seridium cankers ooze sap profusely, but the canker is rather shallow, as opposed to Bot canker which infects the rays of the wood causing a deep canker, often in a V-shape when the branch is transversely cut. If cutting a Seiridium canker with a knife, cut at the oozing site, but cut shallowly, and beneath the bark layer the tissue underneath is usually bright red and and sticky because of the sap.

What I found to be the best control for both cankers, but especially Seridium canker, is irrigating trees during periods of drought or low rainfall. In field inoculated trees, Seiridium cankers developed after inoculating. However, under irrigation the trees were able to heal around the canker site so that within 1-2 years the canker was not longer visible, and trees are healthy today (4-5 years after inoculating).

Although I was glad to know the effect of irrigation, the study was actually set up to evaluate canker development over time – so healthy trees were a disappointment! In greenhouse tests we found that Seridium cankers expanded three times faster on drought stressed trees than on non-drought stressed trees. I did not see the same effect with Botryosphaeria cankers.

On trees already infected, the best control is to prune the brown (dead) branches from the tree. This will make the tree look better, but also it will reduce disease spread by reducing the fungal innoculum. Once this is done, then irrigation is the best remedy to prevent any smaller cankers from expanding to kill more of the plant.

The one thing that has to be stressed is that the infection occurred years ago, and it is only now after the cankers have enlarged that the symptoms are evident. Therefore, fungicides are not effective in controlling the diseases at this time. There also is no good data that indicates that any fungicide is effective in controlling Seridium or Bot cankers. General broad spectrum fungicides such as Daconil (chlorothalonil), any of the mancozeb products (Dithane, Fore, etc.), or Cleary’s 3336 (thiophanate methyl) are generally recommended because they control many pathogens. Only Protect T/O (mancozeb) has Botryosphaeria on the label. But, spraying a Leyland to control the canker diseases is ridiculous. There is no way to spray the entire tree at very regular intervals (every 7 days) throughout the year to try to prevent diseases that can be effectively prevented by not injuring or stressing the trees such as don’t plant trees too close together and irrigate during periods of drought or in summer when rain cannot be counted on.

I also am not a fan of shearing Leylands, as they do in England, to make formal hedges. I have seen beautiful Leylands that have been severely damaged by canker diseases once they were sheared into “boxes”. I don’t know exactly why since although Seridium canker can infect the cut branch tips, infection does not progress into the branch from the cut end. All it did in my trials was to kill any new growth that originated from the pruned end resulting in light tan dead new growth that eventually fell from the tree. It may have something to do with overall plant stress and exposing the inner, often less foliated branches, to heat and cold injury. At least this is my guess.

If the tree is severely affected, the best control is to remove the damaged tree and replant with something else or even another Leyland if that is what is wanted. Within a few years, the trees grow so fast that the loss of will hardly be noticed. 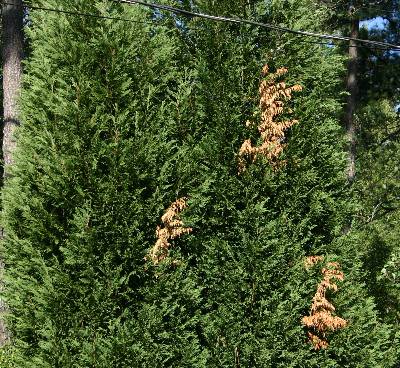 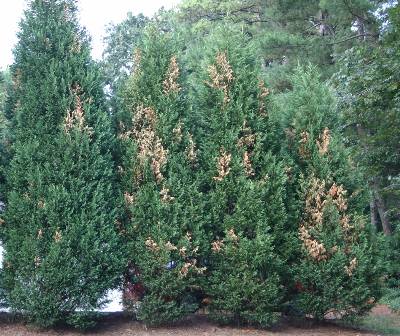 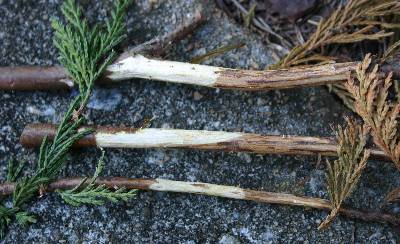