I was visiting with a group of Master Gardeners recently when I asked them: “Has anyone here ever heard of the bodark tree?”

Wrinkled brows and perplexed looks spread across the room. Master Gardeners pride themselves on knowing obscure plants but this one had stumped them.

“So, who knows the Osage-orange tree?,” I continued.

Most hands shot up. “That’s the one with fruit that looks like monkey brains!” one gardener exclaimed.

J. B. describes what she recently saw near the Georgia Dome: “The fruit was the size of a small grapefruit and lime green in color. The skin had a convoluted and curved design which looked like the outside of a brain. The meat had a pleasant, perhaps citrus-type fragrance. It looked very much like the inside of an avocado– green and mushy– but with small seeds.”

M. R. says some British friends of hers saw such a tree in Dallas, TX and discovered that it is sometimes called “Bois d’Arc” or “bodark tree” by locals.

Bodark, Osage-orange, hedge apple or monkey-brain tree all refer to Maclura pomifera, a native tree of great utility. The wood of Osage-orange is extremely strong and rot resistant. It makes long-lived fence posts; the thorny tree was once widely planted as a natural fence in the Midwest.

Native Americans found another use: the strong and limber branches made excellent bows. French trappers called the tree Bois du Arc, literally “Wood of the Bow”. You can easily see how it came to be called bodark tree in later years. The Native American heritage and the smell of the fruit explains the Osage-orange moniker.

MULBERRY KIN The fruit is the most distinctive feature of Osage-orange. It is composed of hundreds of individual seeds surrounded by juicy pith. If you’ve observed mulberry fruit you can see that Osage-orange fruit resembles a swollen green mulberry. Although the skin is tough, squirrels love the interior. Piles of shredded green flakes are often seen sticking to large limbs or heaped at the base of an Osage-orange.

BUG REPELLENT? A few years ago information circulated that the fruit or juice of Osage-orange would repel roaches. A flurry of interest in Osage-orange resulted but the effect of the fruit on bugs, if any, was never shown to be much. Some folks, though, have noted that the fruit can be used to squash insects with one hundred percent effectiveness! American children from prehistoric times onward have used the fruit as ammunition against one another.

REPLACEMENT FOR BRADFORD PEAR? Dr. Michael Dirr writes that Osage-orange grows to an upright-spreading form, with leathery, lustrous dark green leaves. He also notes that a researcher in Kansas selected several “almost thornless” varieties which were more attractive and faster growing than Bradford pear. The thornless ‘White Shield’ Osage-orange is available from Sunshine Nursery (580-323-6259) if you care to investigate.

TREE IDENTIFICATION SITE When you find a tree that you don’t recognize, how can you pinpoint it? Master Gardener Stacy Freeman sent me an excellent Web site for identifying trees sponsored by the Ohio Public Library. The site allows you to search based on tree leaf shape or on fruit characteristics. When I used this site to trace a fruit that resembled a monkey brain it took me quickly, definitely and without equivocation to Osage-orange, the distinctive tree with many names. 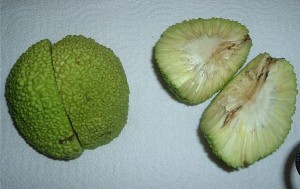