The following is for information only!

This afternoon I made a cup of yaupon tea from the leaves of one of the shrubs that’s growing in my backyard. As I write this I think that the caffeine buzz has begun to hit me. Yaupon holly, a relative of Yerba Mate, is the only native North American plant that contains caffeine.

Yaupon has the unfortunate scientific name of Ilex vomitoria. According to Charles Hudson, in his introduction to the book Black Drink: A Native American Tea, the scientific name derives from yaupon’s association with purification ceremonies that involved ritual vomiting. But the tea of yaupon itself, at least when drunk in moderate amounts, does not cause vomiting.

I first tried making yaupon tea last fall and while I made a tasty tea, I didn’t experience the caffeine high like I am right now. I did three things differently this time. First, I only cut new, lighter green growth, not mature growth. Second, I mashed the leaves in a mortar and pestle prior to roasting. And third, I roasted the leaves for 8 minutes at 300 F instead of 8 minutes at 400F.

After roasting the crushed leaves and allowing them to cool for a few minutes I crumbled enough of them to fill one TBS. Then I steeped these leaves in one cup of boiling water for five minutes. The resulting beverage had a light green color, much like green tea with a grassy aroma. The infusion did not have as much body as a green tea but was not weak either. I found it refreshing and without the bitterness of yerba mate. It had just a hint of roasted flavor; not too much to overpower the other flavors. About twenty minutes after drinking it, an almost euphoric caffeine effect began.

Important Note: Eric Toensmeier has some good advice in his book Perennial Vegetables about trying new foods: “Some caution is in order when trying new food for the first time. You can never be entirely certain how your body is going to react. … You can never know if you are going to be allergic to a new food. Even such ordinary foods such as corn, soybeans, and peanuts can cause serious allergies in some people. When trying a new food plant it is prudent to proceed slowly, particularly if you are prone to food allergies.”

Preparing the leaves of Yaupon Holly make a good lite tea. I would compare it to green tea or Yerba Mate.

My preparation is quite simple:

1. Pick some new leaves and stems.
2. Lightly toast in the oven at 300F until the leaves begin to brown.
3. Take 1 tablespoon of leaves and stems and add to 2 cups boiling water.
4. Steep for 3 minutes and enjoy.

Now it certainly isn’t Orange Pekoe. That said, there is something very cool about making tea from your garden and Yaupon Holly is such an easy plant to grow in Texas.

If you’re a tea drinker, then it’s time to determine the genders of the yaupon bushes in your neighborhood. Like many of you, I prefer to brew our tea solely from females even if recent research at UF failed to detect many differences in the chemical constituents of male and female leaves.

What UF researchers did find is that yaupon leaves contain about as much caffeine as Asian tea, with which it once competed for a global market share. Not only was yaupon tea consumed daily throughout the Southeast, it was exported in barques and sloops to be marketed as cassina in England and Appalachina in France. Note that the “asi” in “cassina” is the Muskogee name for the plant, as in “Asi Yahola,” which means “Black Drink Singer” and comes to us in the familiar name “Osceola,” the famous Seminole leader.

Even more remarkable than all that caffeine, UF researchers found that yaupon leaves have the anti-oxidation potential of blueberries. The leaves are chock full of various isomers of chlorogenic acid, coumaric acid, and a cocktail of flavonoids. Concentrations of these compounds, as well as the psychoactives caffeine and theobromine, are especially high in leaves from nitrogen-fertilized females.

The health benefits of yaupon tea were evident to the first Europeans to come to Florida. The locals exuded good health and towered over the newcomers by nearly a foot. These Timucuans enjoyed numerous dietary advantages over the gold-crazed, disease-ridden, and otherwise tormented Spaniards, but one heretofore unrecognized was their daily consumption of anti-oxidant packed yaupon tea. I can personally vouch for the salubrious effects of regular consumption; typically right before exams, at least one of my students remarks on my youthfulness.

Yaupon tea’s market was done great damage in the late 1700s by William Aiton, a Scottish botanist I believe was secretly in the employ of Ceylon tea merchants. In recognition of the use of an especially strong brew of yaupon in an Amerindian ritual that included ceremonial vomiting, Aiton named the plant Ilex vomitoria. Clearly this fascination says more about the early chroniclers of American life than about the qualities of the beverage.

Researchers have revealed no emetic compounds in yaupon tea; it simply does not induce vomiting. That said, there were indeed special occasions when Timucuan and later Seminole warriors stood around vomiting after drinking large quantities of yaupon, but that was only after fasting for days and then singing, dancing, and generally carrying on all night; Koolaid would have had the same effect.

And what’s the big deal about vomiting? As a child, the mere mention of Sunday school or a demand to eat lima beans could induce a like response. A few minutes after my performance, I would be ready to go out to play or eat ice cream, options seldom granted by my not-so-easily-duped parents. Furthermore, ritualistic vomiting is practiced in cultures all over the world; even dogs recognize the benefits of an occasional purge.

Be that as it may, Ilex vomitoria is its name and we are stuck with it. Such a pity given that recent taste tests conducted at UF revealed an overwhelming preference for yaupon over its commercially available South American sister species, “yerba mate.” Unfortunately, yaupon’s commercial potential was destroyed simply by the revelation of its scientific name.

If you want to stick with leaves from females, the genders are easy to distinguish this time of year. On males, the flowers are in clusters of 5-10 in the axils of leaves whereas female have only 3-5 per cluster. With a magnifying lens or even just good eyes, you can easily see that each male flower has a bunch of yellow pollen-bearing stamens. In the center of each female flower, in contrast, is a roundish green ovary with a cap-like stigma. Of course you could wait to see which shrubs produce the little, round, red, and juicy fruits so relished by thrashers and bluebirds, but not all females reproduce successfully so you might end up brewing some males.

To make a cup of yaupon tea, strip the leaves off a branch, blanch them black in a skillet, and then dry them in a cool oven. Crunch up the crispy leaves and brew them as you would any other tea. Instead of allowing our caffeine addictions to exacerbate conservation problems in the tropics, how about if those of us lucky enough to live in the native range of yaupon all went out and foraged in our own neighborhoods for our next caffeine fix. 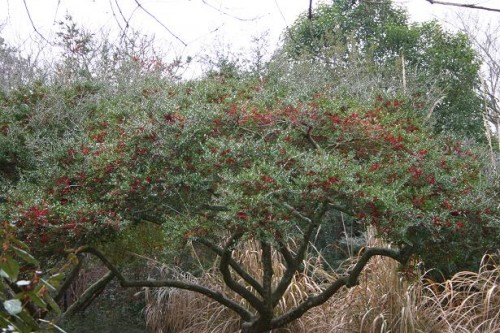 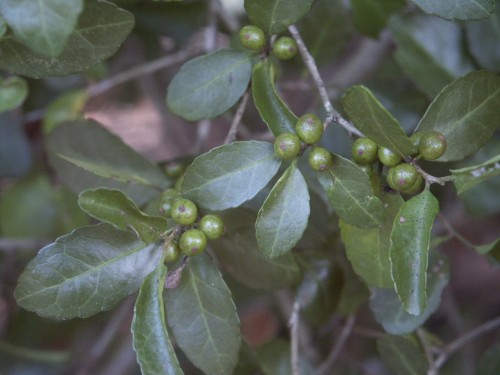 Tags For This Article: tea, yaupon