Q: We had our fescue lawn aerated and overseeded in mid-September and it has come in really well. Unfortunately, a weed started sprouting at the same time as the seedlings, and now is in about one-third of the front yard. It continues to spread and is now going into our neighbor’s yard. Can you identify the weed, how you think we got it, and how we should go about getting rid of it?

A: You have a big infestation of chickweed! Large patches of this winter annual weed are easy to see in fescue lawns now. The light green leaves and tiny white flowers of this pest contrast vividly with the darker green of fescue turf. A light spot-spraying with a broadleaf weedkiller like Weed-B-Gon, Season Long Weed Control and Weed Beater Ultra (click for sources) will kill the chickweed without harming the fescue.

Imazaquin (Image for Nutgrass) can be applied to bermuda, zoysia, centipede and St. Augustine lawns as long as they are not transitioning to green. Since the chemical is absorbed by roots, it takes two weeks to see much damage.

Imazaquin can not be applied to fescue lawns.

It is better just to spray the patches of weed rather than the whole lawn because if fescue seed was planted in fall, the young seedlings might still be vulnerable to the effects of lawn chemicals. Even though the herbicide says on the label that it is safe to use on fescue, the fescue should be mature and well-established. One way to know if this is the case is to recollect how many times you have mowed the lawn since seed was planted. If you’ve had to run the mower over your plot three or four times since planting, the fescue is properly hardy.

Chickweed in warm season grasses (bermudagrass, centipedegrass, zoysiagrass) can be controlled with a pre-emergent such as isoxaben (Portrait). This product MUST be applied by early September, before chickweed seed germinate.

In your case, though, you CAN NOT apply isoxaben at the same time you plant fescue seed. The grass seed will be killed just like the weed seed. My advice is to plant the fescue in early September each year, wait until you’ve mowed the grass three times (or 60 days, whichever is earlier) and then apply isoxaben. You won’t control ALL of the chickweed but you can spray with the broadleaf weedkillers listed above to knock out patches that appear after you seed in fall.

Another option is to apply isoxaben in September and wait until March to plant fescue seed. The fescue won’t be quite as strong as if planted in fall but with a bit a favorable summer weather it should go into the heat of July just fine. 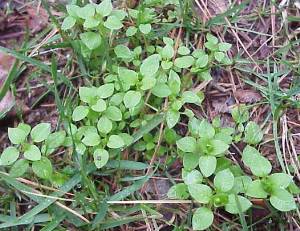 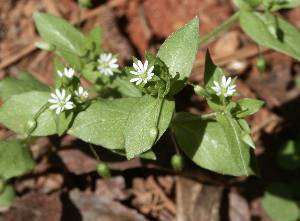