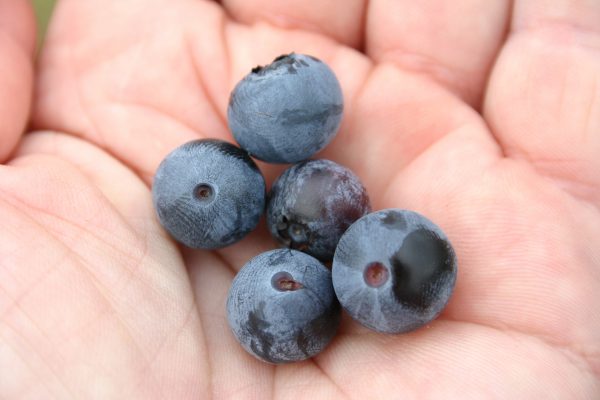 Vaccinium spp.
Cultivated blueberry production in the South consists predominantly of the northern highbush blueberry and the rabbiteye blueberry, a native southern blueberry.

Which blueberry type or variety to plant is a fundamental issue. This is largely dictated by location, with northern highbush adapted to Zone 7a and colder, rabbiteyes from Zone 7b and warmer and southern highbush from 7a and warmer.

WHEN TO PLANT
Plant Blueberries in fall after the first frost or in early spring as soon as the soil can be worked.

WHERE TO PLANT
Blueberries are very specific in their soil and cultural requirements. They must be grown in an acidic, highly organic soil, with a pH of 4.5 to 5.6. This may mean modifying the soil if it has been limed regularly over the years.

Before planting Blueberries, have your soil tested. If the soil pH is 6.2 or higher, modify it by digging out the planting hole 1 foot deep and 3 feet wide. Mix the soil with an equal amount of peat moss, then use this mixture to backfill the planting hole. Plant Blueberries in full sun (8 to 10 hours per day) in well-drained soil. For large plantings, setting plants on a slope will improve air drainage. A north-facing slope will often delay flowering, avoiding injury to flowers from late spring frost if these occur in your area.

HOW TO PLANT
Blueberries are available as bare-root, containerized, or balled-and-burlapped plants. All 3 types are satisfactory planting choices. The latter 2 are more expensive but can be used where only a few plants are being installed. Vigorous 2-year-old plants are recommended. Dig the holes for planting shallower than the depth of the roots and at least twice as wide. Space the plants 4 to 6 feet apart in rows 8 feet apart. Trim broken roots from bare-root plants. Knock containerized plants out of their containers and if the soil on the roots is much different from that in the holes, shake most of it off, being careful not to injure the roots. Mix some soil from the containers with that going back into the holes to avoid problems where the soils interface. Remove the burlap from balled-and-burlapped plants. Set the plants in the holes, keeping them 2 inches higher than they grew in the nursery. Deep planting or poor drainage may cause root or crown rot and plant loss. Replace half the soil and fill the holes with water. When the water has drained out, fill the holes the rest of the way with the remaining soil. Soak thoroughly to settle the soil. Mound soil over the exposed upper root ball. Mulch the plants with 2 to 3 inches of shredded bark or compost.

CARE AND MAINTENANCE
After planting, remove all flower buds and all weak or broken wood from the plants. In the second year, remove only dead or damaged branches. In subsequent years, remove a few of the oldest canes to develop a plant with 7 or 8 young, vertical, vigorous canes. If plants are too vigorous, continually making long canes, pinch the tips out when the canes are 4 to 5 feet tall to force laterals that will bear fruit the following spring.

Watering, mulching and fertilizing are important parts of Blueberry care. Watering will be needed about once a week in dry weather. Blueberries are shallowly rooted with fine, fibrous roots and drought easily damages them. When planted in modified soil as described above, the soil will not pull moisture from clay soil around the planting; the water will not move upward into the lighter soil above. Irrigate with soakers to avoid wetting the foliage and fruit. Wetting the developing fruit can cause it to crack. Reapply 2 to 3 inches of mulch in the spring and again in the fall. Fertilize 4 weeks after planting with an organic fertilizer such as Milorganite(tm) or cotton seed meal, following label directions. The next year, apply again in the spring just before buds begin to swell. After the fourth year split the fertilizer application: half in early spring and half 6 weeks later. Test the soil pH every 2 years and apply sulfur if it is needed to keep the soil acidic. Yellowing of young leaves, called chlorosis, is an indication that the soil pH is too high.

PESTS
Blueberries are affected by few insects and diseases. Pollination, however, is essential in order to get essential fruit set.

Birds are the most troublesome pests in Blueberry plantings. Scare objects such as “hawk eye” balloons are often recommended but the only sure way to prevent loss of the crop is to cover the plants with netting. Remove the net immediately after fruiting or you will have an awful time removing it later. If voles are gnawing on the stems, pull the mulch back from the bases of the plants in early fall. Doing this will prevent the voles from taking up residence next to the stems of the plants and will reduce the chances of feeding injury. Use chicken wire fencing around the planting to prevent rabbit damage.

Competition from weeds can severely stunt Blueberries. Hoe out any weeds and apply 2 – 4 inches of mulch. The mulch will discourage weeds and conserve moisture. Research has shown the importance of mulching Blueberries in developing and maintaining vigorous, productive plants.

ADDITIONAL INFORMATION
Harvest Blueberries when they are fully blue-colored and are sweet to the taste. Some varieties do not attain full flavor for several days after attaining full color. The taste test is best until you become familiar with the variety being grown. Blueberries mature 60 to 75 days after bloom, about the end of June in the southernmost parts of the Southeast and in late July to the north. Since all berries will not ripen at the same time, several pickings may be necessary at 5-day intervals.

As a rule, highbush Blueberries are self-fertile. However, larger and earlier-ripening berries result if several cultivars are interplanted for cross-pollination. Group cultivars by ripening dates so your harvest can progress in an orderly fashion.

Rabbiteye Blueberries are not self-fertile. Plant more than one variety for cross-pollination.