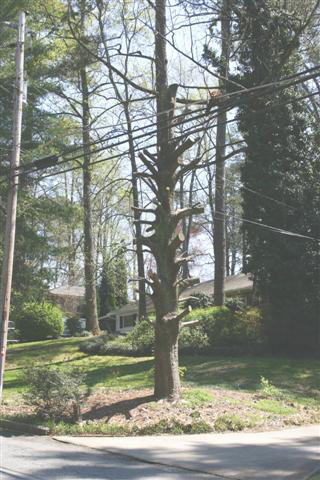 Q: I have three large Bradford pear trees in my front yard, they are about 11 years old and beginning to split.

Two years ago the owner of a house down the street (with a long driveway lined with Bradford pears) cut all of them right at the limb line. I thought he cut the limbs off so that he could pull the stumps. Instead, he left them that way and now they are putting forth new limbs.

Is this something I should consider doing and is now the time to do it? The pear trees are getting too big for my yard and they are killing the grass under them.

A: I don’t have much confidence this will solve the problem. Yes, weight on the large limbs was temporarily removed but the sprouts that grew from the original limbs are even more weakly attached than the originals. They are part of the shallow bark on a limb, not part of the inner sapwood.

I would expect limb sprouts resulting from this type of pruning to begin falling out within 5 years of the pruning.

Bradford pears can be pruned when they are young to avoid the splitting for which they’re famous. Once they are mature, little can be done to prevent their ultimate self-destruction. this magnolia was “hatracked” two years ago small limbs and leaves have sprouted back the new sprouts are attached to the bark, not the limb. They will fail and fall when loaded with rain, wind or ice.