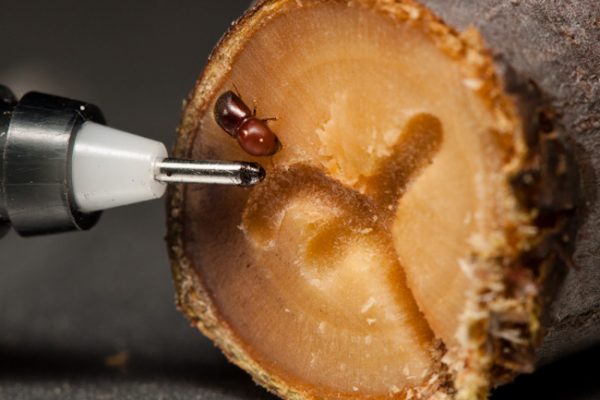 Q: Four of our fourteen Cleveland pear trees have been attacked by the Asian ambrosia beetle (toothpicks of sawdust). The trees are ornamental and do not bear fruit. Should we pull them up to keep from spreading? Can we replant trees this late in the spring?

A: Ha! I’ve never seen the ambrosia beetle in flowering pear trees but it’s obvious your trees had them.

As far as replacing the trees, let me urge you to use something other than flowering pear.

‘Cleveland Select’ and ‘Bradford’ pear are both sterile when growing in isolation. But when two or more varieties of flowering pear are near each other, they definitely can pollinate each other’s flowers. Each tree will produce lots of little brown fruit with seeds inside. The seeds are scattered by chipmunks, birds, and other creatures. The resulting plant is a vigorous bush with three-inch long thorns that spreads like wildfire through natural areas. It is extremely difficult to control except with machinery. Because of this environmental danger, I never recommend planting flowering pears. ‘Natchez’ crapemyrtle, redbud, or saucer magnolia would be good substitutes.

It is true that ‘Cleveland’ pear it’s not “supposed” to have fruit, but if it is pollinated by another variety, like ‘Bradford’ pear, it will have fruit.

If the seeds sprout, they will grow up to resemble the original parent of both varieties of pear: the thorny Chinese callery pear.

As I drive down Highway 19-41 near Jonesboro, I can see numerous patches of callery pear. They came from the ‘Bradford’ pears planted along the highway for the Olympics in 1996.