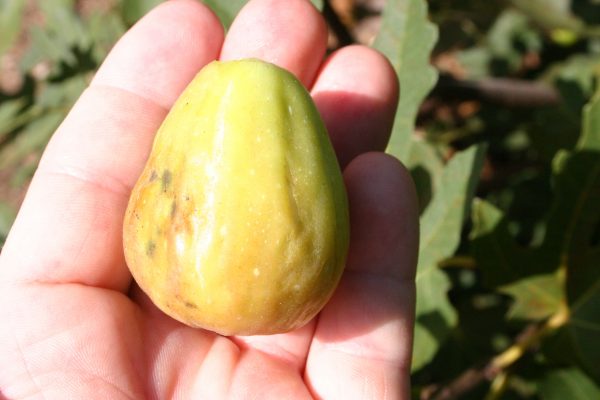 Past years have produced bumper crops of figs for home gardeners. There were enough for birds, yellow jackets, kids and adults to share without dispute. Along with blueberries and raspberries, figs are almost carefree. The biggest problem that a fig bush presents a gardener is when it grows too big for its site.

Of course, some gardeners say a tall fig is best: “The birds get the high ones and I eat the low ones!” But birds are indiscriminate in their feeding. They like to eat both the high and the low fruit. So gardeners sometimes resort to hanging nets over their fig bush. But a net is difficult to manage if the plant is taller than seven feet.

If your fig is too big, pruning is the answer. As with most outdoor plants, winter is a great time to accomplish this task. A few tips will help you make the most of this job.

VERTICAL IS OUT – HORIZONTAL IS IN A fig is a vigorous plant. The Brown Turkey and Celeste varieties that are common in the South grow to a mature height of fifteen feet with an equal diameter. If a fig has not reached what it considers its full height, it sends up vertical shoots from the upper limbs. When the shoots have surmounted the surrounding foliage, they send out horizontal limbs. It is at the ends of these horizontal limbs that fruit will be borne.

Determine first how tall your fig should grow. Then remove the vertical shoots that defy that height restriction. It is better to remove the shoots completely. Make your cut all the way back where the shoot originates. If you simply shorten the shoot, it will rapidly sprout a new growing tip this spring and head for the sky once more. If you can’t remove a vertical shoot completely, cut it back to where a horizontal limb grows from it. In this way, energy will be directed to the horizontal limb, not to growing tall sprouts.

Horizontal limbs can be shortened as needed. But once again, make your pruning cut either where the limb originates or where a side limb is growing. It bears repeating once again: the figs you will enjoy in the fall will grow on the ends of horizontal branches.

ONCE AGAIN IN JUNE Even though you remove lots of limbs and shoots in winter, your fig will have no trouble sprouting plenty of leaves in April to nourish those sweet brown delicacies. Inevitably, vertical shoots will arise. A light pruning can be done in mid-June to take out juvenile vertical sprouts. If this is not done, the plant will devote a high proportion of its resources to increasing its size – not to making the figs you enjoy.

FERTILIZE SPARINGLY
Fig fertilizer needs depend on whether your plant is young or well-established. Young ones should be fertilized in March, May and July. Use one-third pound of 10-10-10 per foot of plant height each time. Older bushes can be fed just once a year, using a pound of 10-10-10 per foot of height in March. One way to judge if your older fig plants need fertilizer is to note the length of the sprouts that grew last year. A mature plant should develop only one foot of new growth each year.