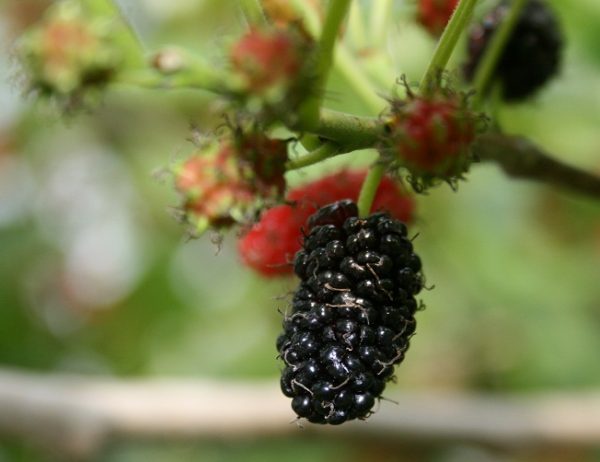 Morus alba
Mulberries are large, fast-growing trees that are good fruit producers for humans and wildlife. The fruit resembles a slender Blackberry and wild Mulberries have a mild (some would say insipid) flavor.

The fruit of cultivated varieties is much sweeter. The fruit drops when ripe and may be harvested by shaking the tree. Wash your shoe soles vigorously before going into the house after picking Mulberries! The fruit are borne on current season’s growth and ripen in May. The three species cultivated are the red Mulberry (Morus rubrum), native to the United States; the black Mulberry (Morus nigra), native to Iran; and the white Mulberry (Morus alba), native to Japan and China. There are usually few problems with plant hardiness in the Southeast but the plants can be damaged by late spring freezes.

Mulberries grow best on a deep, well-drained soil, in full sunshine, but they are tolerant of poorer soils. Due to bird-dispersed seed, which sprout in untended city lots, many folks consider Mulberry to be a weed tree. Adjust the soil pH to 5.5 to 6.5 prior to planting. Fertilize the trees in late winter and in mid-summer, using about 1 pound of 10-10-10 for each inch of trunk diameter.

Prune trees each winter to remove dead and crossing branches. Birds are extremely fond of ripe Mulberries and compete with humans for the fruit. Buy a cover for your vehicles when you purchase Mulberry seedlings to plant.

Varieties to look for: