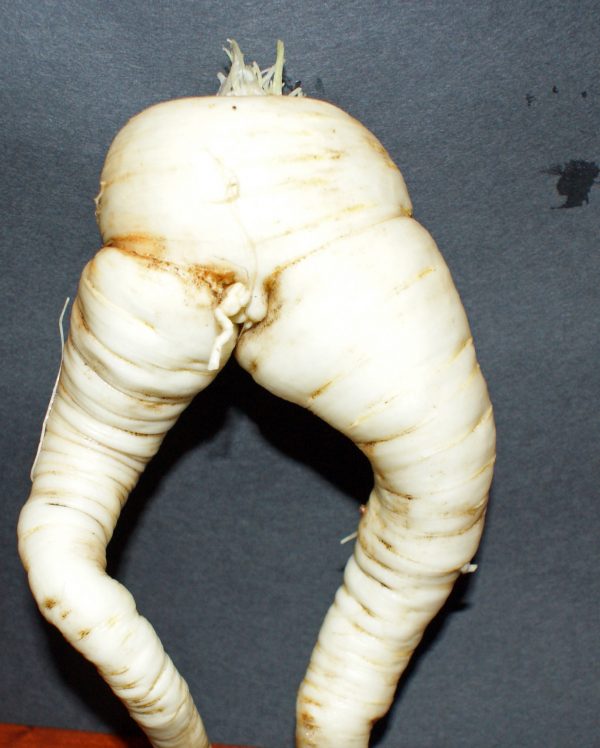 Pastinaca sativa
Parsnips were among the first vegetables brought to Virginia and Massashusetts by colonists in the early 1600’s, and Native Americans quickly began growing these large, white-rooted plants in their own gardens.

The ancient carrot relative has flat, parsley-like foliage and a large white root, and tolerates incredibly cold weather – it is one of the few vegetables that can be stored in frozen ground and used any time they thaw back out.

Parsnip seed is very short-lived, to be sure to check the date on seed packets for viability; also, poor soil preparation can result in low germination. Sow seeds 2 inches apart in deep beds that have been tilled at least a shovel’s depth, and cover very lightly with fine soil. Parsnips tolerate incredibly cold weather – they actually get much sweeter after freezing temperatures, which few gardeners who have not had fresh parsnip can appreciate – so plant seed in late summer for winter harvest. Under the best of conditions, parsnip seed take a long time to sprout, so some gardeners plant radish seed between those of parsnip to mark the rows; harvest the radishes just as the parsnip are up and growing well, which should then be thinned to allow good root production. Some gardeners plant parsnips in individual holes dug deep and filled with part soil and part compost or potting soil, with the seedlings thinned to just one for largest root production.

Parsnip takes up to 120 or more days to mature, but can be harvested as needed throughout the winter; the roots shrivel quickly in storage, so keep unused ones in a plastic bag in the refrigerator. Best varieties include ‘All American’, ‘Cobham Improved Marrow’ (best for shallow soils), and ‘Hollow Crown’.