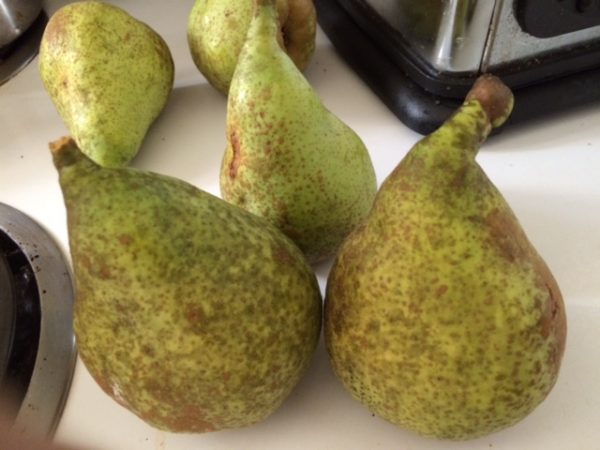 Pears would be as plentiful as Apples were it not for the bacterial disease called fire blight. Most European and Oriental Pears are extremely susceptible to the disease and commercial production is limited to areas remote from any concentration of the disease and where the weather is more reliable – in other words: California. Pears, however, can be grown successfully in home gardens by selecting disease-resistant varieties and carefully pruning them to remove diseased branches.

WHEN TO PLANT
Plant Pear trees October through November or in the spring as soon as the soil is dry enough to work.

WHERE TO PLANT
Choose a planting site that receives full sun (8 to 10 hours will suffice) and has well-drained soil.

HOW TO PLANT
Dwarf trees on dwarfing quince rootstock are recommended for backyards, so buy them from a reliable nursery that can assure that you get what you order. Pears grafted on dwarfing roots will attain a spread and height of 8 to 12 feet. Standard Pear trees will be twice that size. Dwarf trees bear almost as much fruit as standard trees but occupy much less space in the garden. Pears are generally available as bare-root, 2-year-old whips. As soon as you receive the trees, plunge the roots in a bucket of water for a couple of hours to re-hydrate them and keep them from drying out. If planting is to be delayed, heel-in the (see Fruit Introduction) trees until you can plant them.

To plant a Pear tree, dig a hole twice as wide as the spread of the roots and deep enough that the plant will be at the same depth it grew in the nursery. Trim off excessively long and damaged roots, then spread out the roots in the bottom of the hole. Supporting the tree with one hand, begin to backfill the hole with soil and firm the soil with your shoe. When the hole is half filled with soil, fill it with water. After the water has drained out, replace the remaining soil and fill with water again.

CARE AND MAINTENANCE
Pear trees require less attention than Peach or Apple trees but still need annual pruning, ideally in mid- to late winter. The training system is the same as that for apples: the central leader system. Thinning the fruit is also necessary to produce a good crop and to prevent limb breakage each year.
Each winter after the Pear reaches maturity, prune the tree to remove dead or damaged branches, water sprouts, vertical suckers and branches touching the ground. Also remove branches growing into the center of the tree and those rubbing on other branches. Most Pear varieties try to make scaffold branches with narrow crotches that quickly ascend. Usually, there is no need to do anything about it because the weight of the fruit will eventually bring the branches down.
Fire blight is a bacterial disease that is spread by bees in the spring. Affected stems and leaves at branch ends appear to have been burned and cankers (dead areas in the bark) can form on branches. Overwintering cankers are the primary source of infection the next spring. Remove all evidence of fire blight by cutting at least 6 inches below evidence of the disease. Sterilize your pruners before each cut by dipping the blade in a small bucket of disinfectant. Make the disinfectant by mixing a cup of bleach or rubbing alcohol with 9 cups of water. Yearly sprays with a bactericide at bloom time may also help control this disease.

Other care of Pear trees includes watering, weeding, fertilizing and applying pesticides. Pear trees need water in dry weather, especially if they are growing in light, sandy soils. Apply 1 inch per week when nature does not cooperate. Control weeds beneath the trees by hoeing and apply 2 or 3 inches of mulch. Young dwarf Pear trees should grow 11/2 feet each year. If they do not seem to be growing, fertilize them with 10-10-10, at a rate of 11/2 pounds per 100 square feet of ground beneath each tree. Avoid overstimulating the trees, because soft growth is very susceptible to fire blight.

PESTS
Pears can be attacked by insects such as Japanese beetles and aphids. Diseases such as scab, black rot and fire blight can disfigure or ruin fruit..Your local Extension office can provide you with a spray schedule for specific pests and diseases

ADDITIONAL INFORMATION
Harvest Pears before they are fully ripe. It will take some experience for you to know just when to pick your Pears. Ripe Pears are soft and particularly attractive to yellowjackets and birds. Pears will continue to ripen after they are picked, so store them in a cool place such as a refrigerator. Set some out in a warm spot every few days to ripen. Asian Pears mature as early as midsummer; most European varieties mature from August to mid-September.

VARIETIES
Since you need to plant 2 varieties for cross-pollination, check with your supplier to make sure which varieties will cross-pollinate the others. Some are self-infertile and will not pollinate others either. ‘Seckel’ and ‘Moonglow’ seem to pollinate most other European varieties.

Bartlett
NOT RECOMMENDED due to susceptibility to fire blight

Asian Pears are not as hardy as European Pears but some hobbyists grow them successfully. They are dessert-type Pears maturing in midsummer to late September. Plant 2 Asian varieties for best pollination because European varieties are not completely reliable for pollinating Asian Pears.

Ya li
a Chinese import of excellent quality.