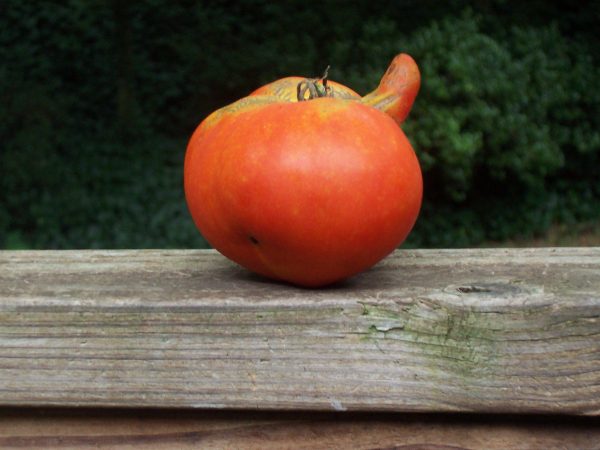 Over the years I have received several pictures of oddly-shaped tomatoes. They had “horns” and I couldn’t figure out why.

Now Dr. Joe Kemble at Auburn University has finally laid it out for me:

It is a physiological/genetic disorder. With tomatoes, you can expect about 1 genetic mutation for every 1,000 plants. That’s actually a very high number.

The images with the pronounced horns resulted from a problem that occurred while the fruit was still microscopic. A few cells divided wrong and produced a extra fruit locule. Usually when you slice a fruit in half horizontally, you see 4 or 6 distinct segments in large fruited tomatoes. These are the locules. The error that occurred during cell division gets magnified as the cells increase in number and in size. The environment is the usually culprit causing the genetic problem. Usually extended high temps (above 90 during the day and above 82-85 during the night) causes the development of malformed fruit. You might only see one or two fruit on an occasional plant. Older heirloom types are more susceptible.

As day and night temps moderate, you should see fewer and fewer of these.